The Old Colliery Canter is an event hosted by It’s Grim Up North running, situated in Rabbit Ings Country Park near Royston just through Barnsley. The site is, as the name suggests, a former colliery, now a lovely park filled with nature and one big hill. The race, like many of Grim’s offerings, has multiple distances available – the route itself is 5 miles, with competitors able to choose in advance how many laps they plan to undertake. I was signed up to the 10 mile version, which I also did in 2021, so was keen to return and see if I could get some minutes knocked off my time.

Worth noting at this point that the 2021 race was held in what I then considered to be the worst conditions possible. Absolutely torrential rain from start to finish, which I was poorly prepared for due to a bit of a hangover which meant I got dressed in a daze and didn’t think of things like waterproof layers or gloves. So I felt pretty smug this year rocking up to the start line on a lovely sunny day, appropriately dressed, suncreamed up and with plenty of water. I was wrong to be smug.

Our 10 mile event commenced at 11am. We arrived just in time to wave off the 15 milers (including fellow Strider Shaun) before collecting our numbers and browsing the feed station (which I was delighted to see included an enormous pan of roast potatoes – I didn’t eat any, but the idea they were there was sustenance enough). It was a fairly small field so with not much in the way of fanfare, we were off!

I felt good on the first lap, maintaining perfect pace for my very precise goal of as-close-to-90-minutes-as-I-could (a PB for the distance, so a little ambitious but I felt still achievable) and enjoying the gorgeous views that I’d missed last year due to aforementioned terrible weather. I even found myself from an early point in the race as the leading female! (Not a feeling I massively enjoyed really, but at least a novelty!) The route loops around the country park, up the one big hill, round the summit and back down before an out-and-back woodland section, which last year consisted of mid calf deep muddy bits but this year was a pleasant soft trail.

And then midday began to approach, the sun beating down at the highest point in the sky, and the temperature seemed to all of a sudden rise massively. As we started lap 2, my legs began to feel wobbly despite my chain eating of Gummy Bears and my hot little feet began to blister. Another 5 miles suddenly felt like a Very Long Way. Unfortunately I wasn’t able to shake off the woozy feeling at all and my pace well and truly dropped. I retained the lead until 7.5 miles (I suspect many of the other runners were also resorting to walking breaks in the heat of the day) when the woman who went on to win absolutely breezed past me (my husband Jim kindly said to me at the finish, “she looks like the kind of person that goes on a lot of hot holidays”) and I knew there was no way I could even attempt to keep up. Another woman caught me with 1k to go though, and I did manage to hold her off for a 2nd place finish, taking about 90 seconds off my 2021 time and limping over the line in 1.36.51. Although an improvement, I couldn’t help but feel a little disappointed, but a lovely homemade cupcake, a 4 pack of Crunchies and a can of cider at the finish soon cheered me up.

In hindsight, I think I preferred the rain. 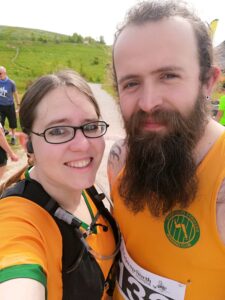