When I first saw Buxton Half Marathon on the Road Championships menu for this year I knew it was one I had to sign up for. For two reasons: having never done it before and Buxton being my hometown.

Organised by Buxton AC, the event was relatively small compared to Sheffield Half with 334 finishers. It included chip timing, attended bag drop, T-shirt and medal.

Registration was quick, collecting my race number and T-shirt from the HQ inside the Pavilion Gardens building. There was time for a Striders team photo in the bandstand, before dropping off my bag, then a little warm up jog around the Pavilion Gardens. It is a beautiful park and lovely to walk around, however the invasion of dinosaurs (!) this weekend meant the warm up jog was a loop around the perimeter instead. 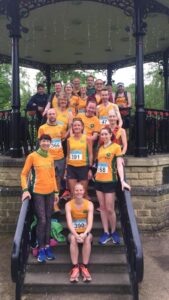 A sample of the twenty eight Striders who finished the race. Little did they know what awaited them. (ed.)

Runners gathered at the start line on the road behind the Opera House. Some announcements were made, however I couldn’t hear what was said! As the church clock across the road struck 10am the race began! It started with a steady 180m/590ft climb over 4.5km/2.8 miles taking runners to the highest point of the course along the main road out of Buxton towards Leek. Note: the course is run on open roads so runners had to stay on the left to allow cars to overtake.

Once at the top the rewards were the spectacular views of the countryside and a much needed appreciation of what goes up must come down! The next 7km/4.3 miles was my favourite part of the route covering a 220m/721ft descent to the lowest point of the course. This section took runners off the main road onto a single track road, complete with cattle grids and cows! Whilst giving back the ability to breathe, the lack of traffic was also welcome. Running through the Derbyshire countryside, the scenery was beautiful and did distract a little from the aching legs. Although this section was mostly downhill, there was the odd cheeky climb thrown in for good measure.

Now past the halfway mark, a second climb awaited. Much steeper than the initial climb (but not as far), on fatigued legs this felt much more of a task. However, as some say, pain is temporary and it did end. This was followed by another smooth downhill section and a turn back towards Buxton. The road from Brierlow Bar towards Harpur Hill turned out not to be as flat as I remembered when I found we were gradually climbing up again! It was along here I started using parkrun as a unit of measurement. Just over a parkrun to go… less than a parkrun to go now… three quarters of a parkrun to go… This got me up the incline to Harpur Hill. Then it was back down into Buxton, including passing my old primary school, which brought back a few memories! One last short hill before a gradual descent around side streets and back in to the Pavilion Gardens park for the final push across the finish line.

Finishers were rewarded with a medal and big bottle of Buxton water!

Some Striders (myself included) treated themselves to a well earned massage afterwards with a donation to the Mountain Rescue service, who had been located in some of the more remote points of the course.

I was just in time to catch the last of the prize presentations, including Striders placing 1st in the following categories: 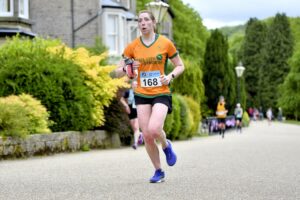 Race reporter Kathryn Liddiard with Neal Pates reduced to a mere blur in the distance. (ed.)