In January, caught up in New Years hype I decided 2022 would be the year of my first ultra.

Being severely directionally challenged I signed up for Ultra Challenge’s Peak District Challenge 50k, the second half of a 100k route to/from Bakewell that required zero navigation.

I rocked up to the race on 10 July having done very little running since Manchester Marathon. Not ideal, but better than risking a jilting by my fiancé by shirking wedding planning for yet more running (he is now my husband so it was probably the right choice).

I got to Bakewell at 5:45am to pick up my bib and leave enough time for faffing before setting off in one of the 6:00 – 6:30am waves. There was maybe too much faff and I found myself in the last wave, waiting around for the other stragglers to be herded up. After a safety briefing in which I was very much singled out as the only runner in the wave, we were off! 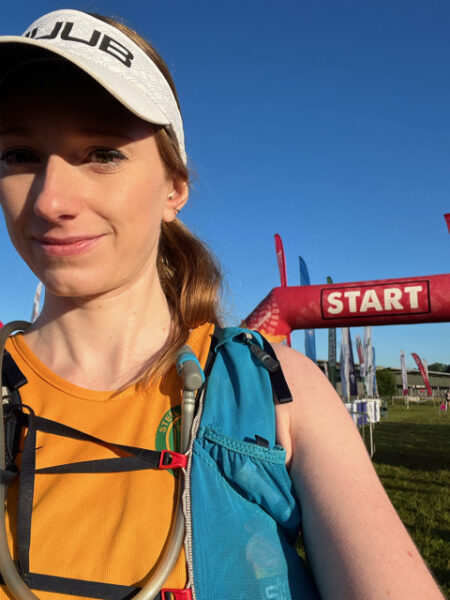 Strider Rachael at the start line

Given my lack of training and the forecast heat, I went out steady with my main goal being just to finish. The first few miles ticked away nicely. Around mile 5 I found myself sandwiched among walkers on a single track and I wished I’d started with the other runners.

Eventually, I got free and soon after I was at the first rest stop in Monyash. Feeling good and wanting to make the most of the cooler morning I had a brief check of my water, re-applied my suncream, and was off.

The next 6 miles to the Minninglow rest stop were uneventful. I walked the big climbs, and got some good running in on the flats of the High Peak Trail. At Minninglow I filled my spare flask up with plain water, for dousing myself with if it got too hot. In hindsight this was probably the best decision I made. More Factor 50 applied and back out. 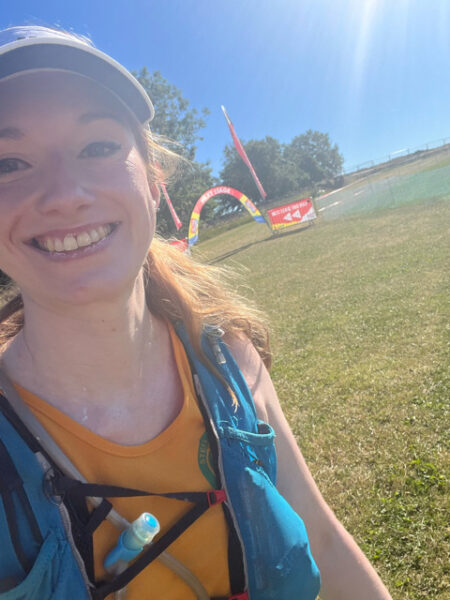 Still smiling at the Next Stage marker

The third section was when things started to get tough. The next stop was 10 miles away, and I was back on the unshaded flats of the High Peak Trail. I was also totally alone, with only the occasional passing cyclist for company. Overheating, the boring trail began to annoy me. I humoured myself with stupid signs and the knowledge that my supporters would be near the next stop. 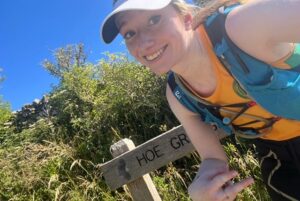 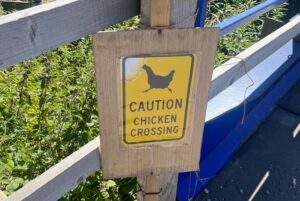 Just when I thought I was going to be on the Trail forever we turned off and I gambolled down a grassy bank and onto a narrow tree lined path – bliss!

As I popped out the other end I was surprised to see my husband and our friend. I walked and had a little chat to them, before leaving them to take advantage of the downhill. From then on I focused on getting to the last rest stop at Darley Dale. Frustratingly, the stop was about half a mile from where it should have been. Eventually the route diverted into a park and I dashed into the measly bit of shade under the tiny marquee, where I spent more time than I would have liked topping up water/suncream/shoving fresh fruit in my mouth.

I wasn’t super keen to step out of the rest stop into the now blazing midday heat but I knew I only had 10k to go, so might as well get it done with. The route took us into some woods, where I willed my tired legs to jump over the rocks and tree roots. My watch ticked over marathon distance and I knew that whatever happened I had technically run an ultra.

Somewhere along this last section someone spotted my vest and shouted ‘Come on, Strider!’. I was a bit tired and wobbly by that point and the encouragement made me a tad emotional – so thank you to fellow Strider Jamie Smith, who I later found out was the mystery motivator.

At mile 29 and a half I started to recognise the fields of Bakewell Showground, and the realisation that I was going to finish made me a little teary. I rounded the corner, expecting to see the finish arch straight ahead, only to realise that they were making us run halfway round the field before the line… I somehow managed a half-decent sprint finish to cross the line, and that was it – I had run an ultra! 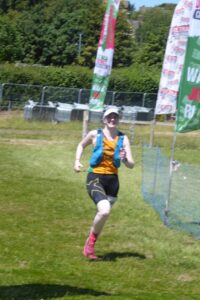 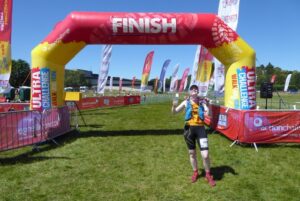 Rachael at the finish, job done

Medal, t-shirt, and complimentary glass of Prosecco collected, I allowed myself a sit down and it was glorious. 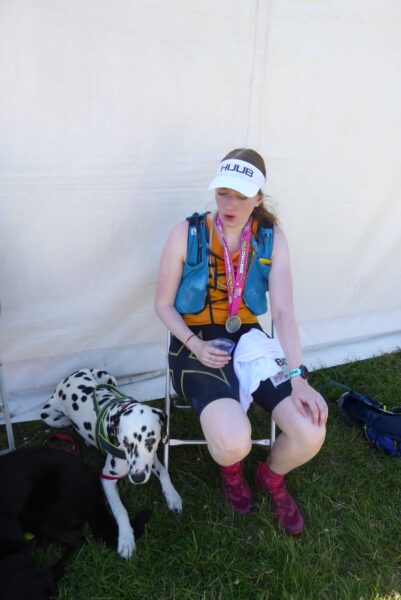 Would I do it again? Well, it turns out the course was only 48km so I feel like I at least need to do another 50km…

The Peak District Challenge offers a multitude of variations: the 100km Continuous Challenge, the Full 100k – 2Days, the First Half and Second Half Challenges (both 50k), the 1st Quarter Challenge (25k), the 25k Bakewell Loop and the Bakewell 10 (16km). Focusing on Rachael’s race (the Second Half Challenge): 53 runners took part. Winner of the men’s race was Adrian McGuire in 05:17:43, while the women’s race was won by Liz Needham in 06:12:40. Lone Strider Rachael was second female, well done Rachael. No club information or age categories were listed.

Full results are available on the Action Challenge website.