In search of something a bit different, I entered the Peak Rail Runner vs Steam race organised by Matlock Athletic Club. A 7-mile, flat run from Rowsley to Matlock and back alongside the Peak Rail Heritage Railway. The challenge is not only against fellow runners, but also against a train full of runners’ family and friends.

Getting to the station I was pleased to bump into a few other Striders, and some friends of the club, and it was a nice atmosphere at the start area, with a lot of runners and spectators milling around waiting for the train to arrive. Unfortunately, due to a coal shortage, we would be racing a diesel rather than a steam train, but it was still exciting. 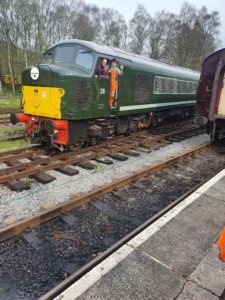 Not sure how to take the race, which had a few flight of steps, a couple of road crossings, and a level crossing, my plan was to stick with fellow Strider Gillian Allen for as long as I could, selfishly using her as a pacer until I ran out of steam. Right on time at 9:30, we set off from the end of the wide car park. We were given a 2 minute head start over the train, which was scheduled to take 54 minutes.

My plans of following Gillian were almost immediately scuppered. After 150m the wide start narrowed making it very much like a cross-country start, a mad sprint to get there first, only (despite warming up in that direction) I hadn’t spotted this and was slower off the line. Managing to weave my way through I caught up with Gillian by the end of the first mile but it took a lot of effort. 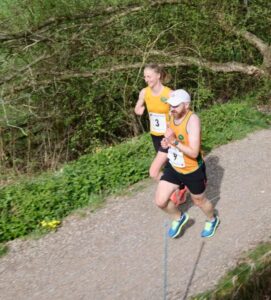 Malcolm and Gillian in action

Mile 2 saw the first flight of steps up to the bridge over Darley Dale station, then a slight downhill to an out and back to get back onto the trackside path. At this point we could see the leaders and worked out we were sitting around 15th so not doing too bad.

The third mile was right alongside the tracks, and it was here that the train started to catch us. This was also where the level crossing was. The train started to pass us 500m or so before the level crossing, this gave stunt photographer Peter Brash the chance to take a nice action shot of us while leaning out of the train window. But it also meant we had to slow to allow the train to pass before we could cross. There were around 5 runners in front who were less fortunate and had to stop at the crossing, allowing us to catch them.

After looping around Matlock station as the train waited before heading back, we had a couple of narrow paths and bridges, before facing the last 3 miles as a reverse of the first 3. Thankfully, the train took longer than us to turn around at Matlock so we didn’t see it on the way back and could focus on racing people instead.

Still running almost stride for stride, with 1km to go I thought I’d see what I had left and pushed on. This was very optimistic and by 500m to go I was regretting it and heading backwards. Gillian moved more smoothly and glided back up to me and we ended up having a good battle over the last 200m. I won out on this occasion, by 1 second, but both of us beat the train.

Having a debrief while waiting to cheer the other Striders home, it turns out that while I was using Gillian as a pacer, she was using me as one. This made me feel less selfish, but also meant we pushed each other for the whole 7 miles.

Going against type, the train was early and finished in around 52 minutes, meaning that many who would’ve beat the scheduled time, found themselves being overtaken in the last mile, including Striders Mandy Taylor and Caroline Brash. A quick assessment from Caroline after the race was that she never wants to do it again, although apparently this was also uttered by her following last year’s race, so who knows.

Although there were only 4 of us, Striders were scattered across the podiums (or should have been). Gillian was 2nd Female, and Mandy was 1st FV50, both picking up prizes including a choice of Easter Egg. The female team prize was awarded to Totley on the day, but on reflection the Striders team were 4 minutes quicker than our neighbours. The organisers were very apologetic over email, I’m not sure if they stripped Totley of their Easter Eggs and re-awarded them though. 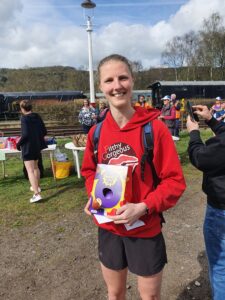 Gillian shows off her prize 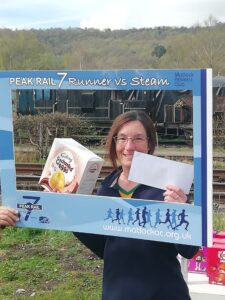 Despite the results mix up, the event was pretty well organised, the road crossings were well marshalled, and it was a nice race, although Caroline might say otherwise.

After 12/18 months of fragmented racing/running I have decided to book a race a month this year to re motivate myself.

I entered this race due to the fact that it was the only one I could find in April, close to home, not huge mileage and on the only day I was available. Which happened to be a bank holiday.

Given the details, you run for a total of seven miles Rowsley-Matlock-Rowsley and try to beat a steam train, I kind of knew I would not ‘win’ given the 56 mins but felt pretty sure I would only be a few minutes behind!  My target was (to round it off) 1hr.

I went to recce the route on the Saturday before, was told by the station person that yes there was definitely a fun run happening on the Monday!

I walked a mile and half, the route was narrow and in one place became an over grown single track.  After the first flight of stairs I found this opened up to a road section, was unsure where the route went from there and with sinking heart turned around. Disappointingly, I was thinking that I would need to revise my target of that 1hr.

Race day came.  Great to see some fellow Striders there.  It was a cool morning but dry. Ideal running conditions.  Approx 200 runners all set off.  The course didn’t seem so bad, and after reaching the road you were led to a wide, open path similar to RV. Much better, and you could see the rail tracks.

At the turn around point in Matlock, the train was ‘resting’ and it was possible to wave to the spectators that were on the train. Having run down the track it was a case of returning on the same route.

Returning to Rowsley, it was quite apparent that the train was aiming for its own PR – it came in almost 5 mins too early! So it did manage to pass quite a few runners.

Relieved that I was almost at the end I decided to try for a short, tired sprint finish.

This resulted in me just getting 1st place in Age Cat by a mere 1.5 seconds. I am unsure where the speed came from but managed to knock over 6 mins from my target. (and had the train been on time, would have beat the train!)

Goody bag included a cap as well as biscuits/energy gel.

Plenty of marshals and it was a very friendly atmosphere.

It turns out that the Striders also won 1st female team, though at the time this was given to Totley AC.

Full race results are available on the webscorer website. 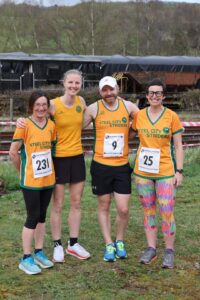