The second leg of this year’s Road Championship was held at the Dronfield 10k. We had some stellar performances at the front of the field, with Striders winning both the men’s and women’s races, along with plenty of personal heroics further back. There’s a fuller account in the race report, but here’s how things now look at the top of the championship standings:

Our age-graded table handicaps runners by age and sex, giving all runners in the club a chance to compete with everyone else on an equal footing. For more information about the calculations, see BMAF’s explanation.

Our top 3 are unchanged at this update, with Abbie Pearse a nose in front and Kate Scott and Rob Byers neck-and-neck behind her.

Four runners who’ve only run once are scoring at the same sort of level—Adrian Fisher, Caroline Brock, Stephanie Street, and Carol Beattie—making this a competition to watch.

Age-Graded Table, top 10. For the full table, see The Spreadsheet. 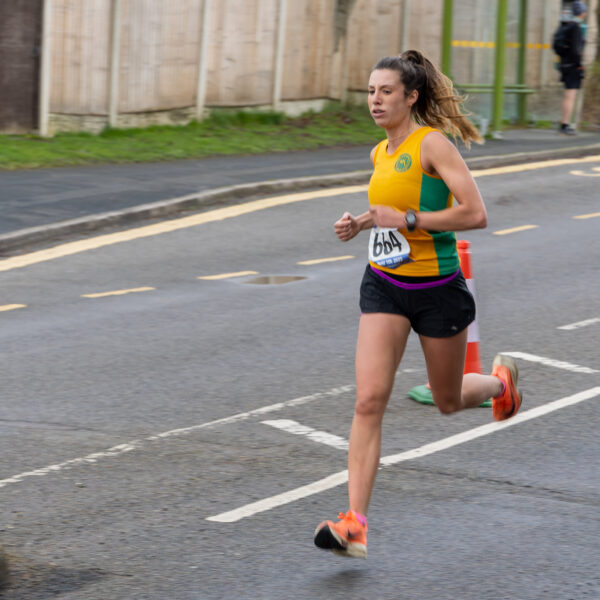 25 Striders have run both races so far, and they inevitably dominate the age category standings. With 106 Striders having run at so far, there isn’t room for everyone below, but the tables below include everyone who’s run twice, plus the most competitive runners with only one score on the board so far. For full standings, see The Spreadsheet.

Rob Byers has had a flying start to the season, but Richard Pearson showed on Sunday that he has the form to keep him honest. No slacking at the front, Rob. 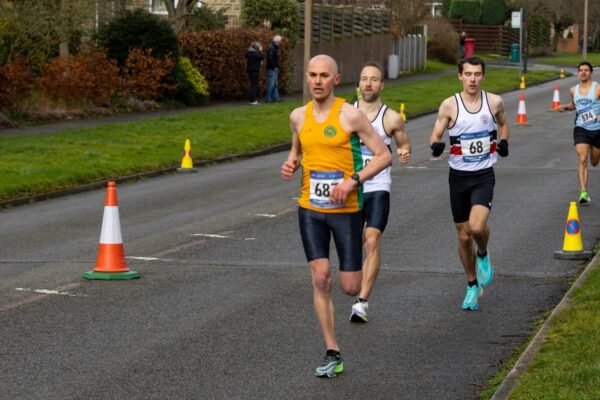 Abbie Pearse has really kicked on over the last year or two, emerging as arguably the fastest woman at the club right now. Only Caroline Brock has shown comparable form in the Road Champs so far.

Malcolm Baggaley leads the M40 category, but he’ll be looking over his shoulder, wondering which of Adrian Fisher, Michael Cockings, and Stephen Schubeler might be preparing a challenge.

Sarah Allcard had home advantage in Dronfield, but it’s her trip to Scunthorpe that’s earned her the F40 lead ahead of Jacqui Herring. Sarah Percival is also in the mix.

Jonathan Legon has the early M50 lead, but club captain Neil Schofield looks menacing behind, having shaken off the fatigue from the previous day’s cross country and turned in a big performance. 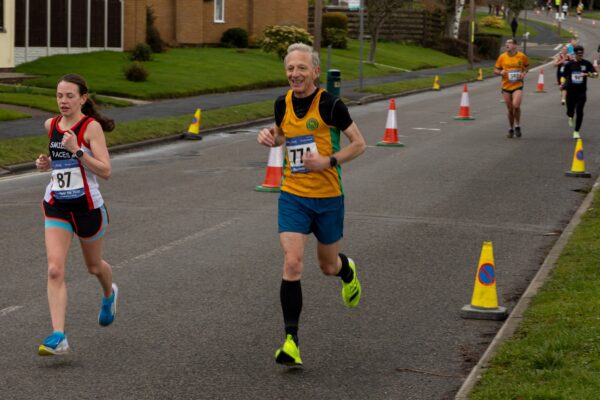 Kate Scott (another who ran the cross country on Saturday) has had an edge over Karen Clark in the F50 category so far this year, but on Sunday Fiona Jeffries was faster than both of them. Caroline Greenough also showed well.

Richard Pegg leads the M60s, but last year’s champion Paul Bentley was fastest in Dronfield by a minute, so looks like the one to beat.

After an attritional Yorkshire Vets’ Cross Country on Saturday involving hill reps in Norfolk Park, I took two days’ recovery and still felt sore afterwards. Carol Beattie raced the Dronfield 10k the next day instead, and was just a few minutes down on F60 leader Stephanie Street.

David Parry and Graham Hague were separated by just 20 seconds on Sunday, so could hardly be closer at the top of the M70 table.

Sheena Woodhead continues to run well, and takes an uncontested lead in the F70 category.

The next race in the championship is the Sheffield Half Marathon on March 27th. The few of you who haven’t entered yet can still enter here. If past years are anything to go by, we’ll have even more Striders running then than on Sunday, so there’s bound to be plenty of movement at the next championship update.

After that we’ll have a 6 week break before the Holymoorside 10k on May 8th. In the interval the Fell Champs will get underway at Kinder Downfall on April 17th, and the Trail Champs at the Cat Lane Canter on April 24th.