Leg 3 of this year’s Road Championship was the annual Striders takeover of the Sheffield Half Marathon. We had 150 members running (that I know of). A few may have been slowed by pacer flags, or pushing a bath(!), but a surprising number were at full speed, even posting PBs, despite The Hill. At the front, we had Abbie Pearse finishing 5th in 1:26:17, and Luke Tipping 9th in 1:15:22.

At this stage of the season, the Road Champs tables are dominated by those who’ve done three races, but it’s worth keeping on eye on those who’ve missed a race or two but scored big at those they’ve done.

Our age-graded table handicaps runners by age and sex, giving all runners in the club a chance to compete with everyone else on an equal footing. For more information about the calculations, see BMAF’s explanation.

At the moment, it’s looking like it’ll take an average age-grade of close to 80% across five races to get near the top of the table. That’s similar to last year once you take out outlier Dot Kesterton (I’m sure there’s a more flattering way of putting that!), when Lucy Broom averaged 79.52% in narrowly taking 2nd place.

The way age-grades are calculated, which compares your time with the world record for your age group, means it’s harder to get a good score on a slow course like the Sheffield Half’s. Kate Waddicor’s 81.45% age-grade, which has only been bettered by Abbie Pearse’s 82.35% at the pan-flat Valentines 10k, therefore jumps out as especially impressive. Luke Tipping’s 77.50% shows he could post some 80%+ scores elsewhere too. 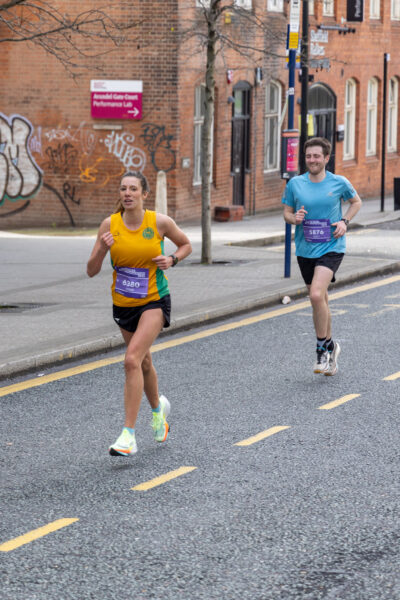 We’re now down to 17 Striders who haven’t missed a race yet this season. They generally outscore everyone else in the tables below.

If you have missed a race, or even all three, that’s fine of course: the race calendar is a menu not a schedule, and your final score is made up of your best 5 scores from 12 races; you’re not meant to do them all.

The formula for calculating age category points is 100 x (your time / winning time), so it does allow for the tough course: the hills may have slowed you down a bit, but they’ll have slowed the winner down too, so it’s all factored in.

The tables below show everyone who’s run two races so far and is in the top 10 in their category, plus a few extra in the smaller categories. As ever, for full standings see The Spreadsheet.

Rob Byers did a great job carrying the 1:35 pacer flag around in 1:34:26. A week later he’d break the club’s men’s senior marathon record with a 2:29 in Manchester. So it’s fair to say he was holding back and could have gone a bit faster, but he still did enough to stay top.

Behind, there’s a group of runners including Luke Tipping, Richard Pearson, Seth Kirby, and John Wilkinson who are running well but who it’s difficult to compare as they’ve all run different races. Things may look clearer after another outing or two, and all of them except John are on the start list for the Holymoorside 10k.

For now, here are all our senior men who’ve run at least two of the first three races: 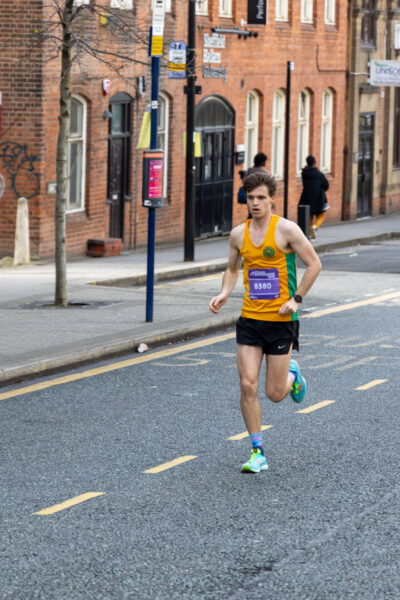 Abbie Pearse continues to dominate the senior women’s category, with 5th place on the day in 1:26:17 earning her 93.99 points. New member Laura Mella scored 88.89, and looks secure behind her in 2nd. It was great to see several others running for the club for the first time not much further back. 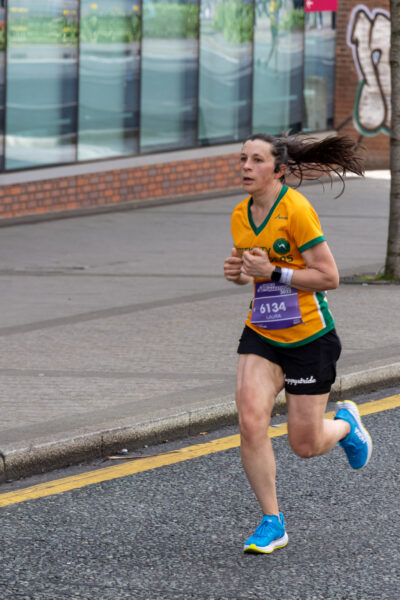 The indefatigable Malcolm Baggaley ran tempo around Sheffield to earn a well-deserved lead in the M40 category. The standout performance was from Michael Cockings, though, who flattened the hills with a 1:21:57, scoring 84.46 points. James Storey, Ade Fisher, and Stephen Schubeler are all potential challengers, and all have their names down for the next race. 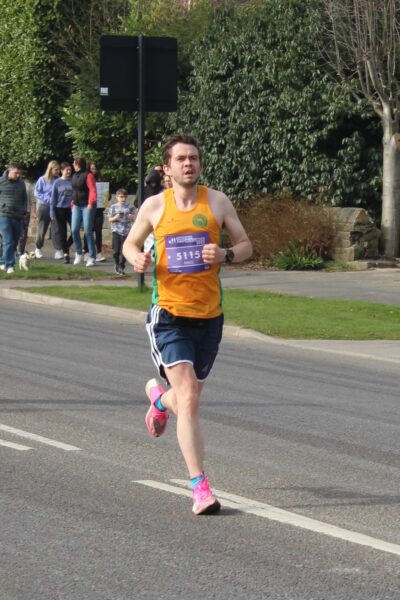 With Jacqui Herring and Sarah Percival sitting out the Sheffield Half, Sarah Allcard’s reward for toughing it out up the hill is a near 100 point lead in the F40 category. All three are expected at the next fixture. 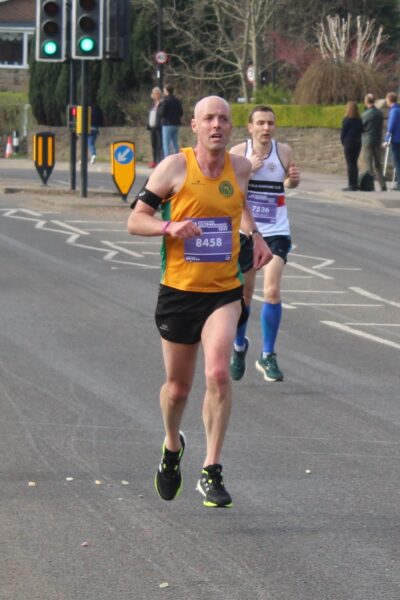 With Kate Scott taking the day off, Karen Clark, Catherine McKeown, and Nada Ross took the chance to move up the table. Kate was spotted on the course on a bike, but after careful investigation she was found to be spectating, not cheating. 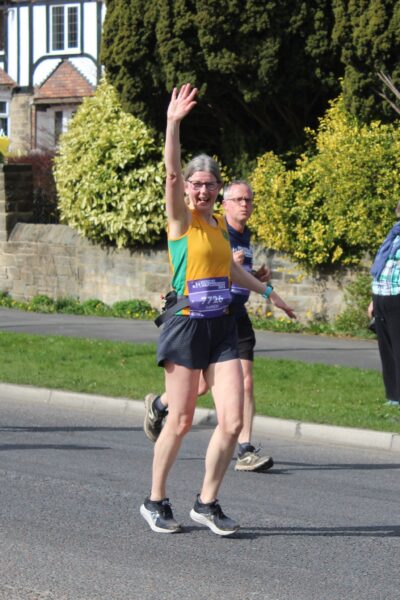 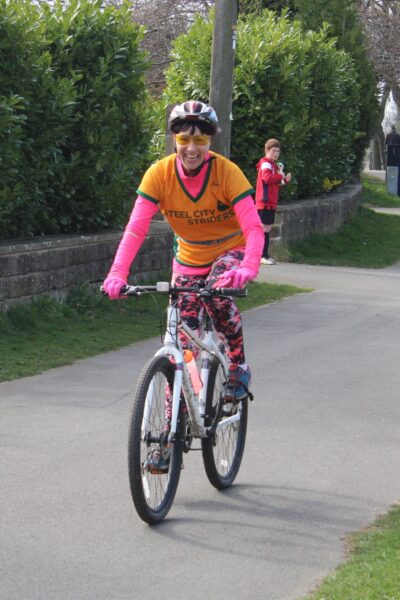 Richard Pegg and Kevin Haighton enjoy the top two M60 places for now, but neither has been able to match Paul Bentley when they’ve raced head-to-head this season. Paul’s 1:44:01 was again about 5 points better than his M60 rivals.

A shout out is due to Rob Martin, though, who was our first M60 (and 3rd M60 from any club) on the day in 1:40:40, but because of where his birthday falls and the club champs rules is a Road Champs M50 until next year. 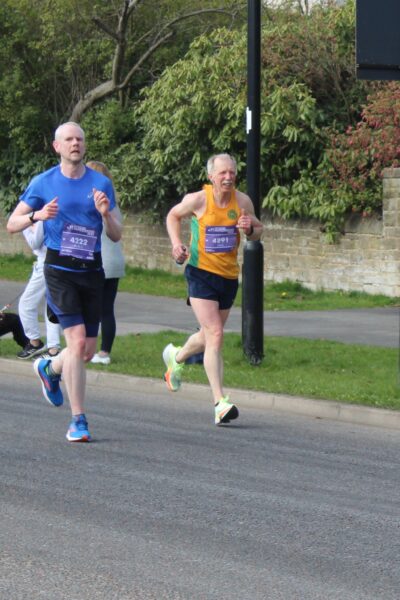 Jo Gleig seized the F60 lead ahead of Gillian Pearson as Stephanie Street tapered before the Manchester Marathon. 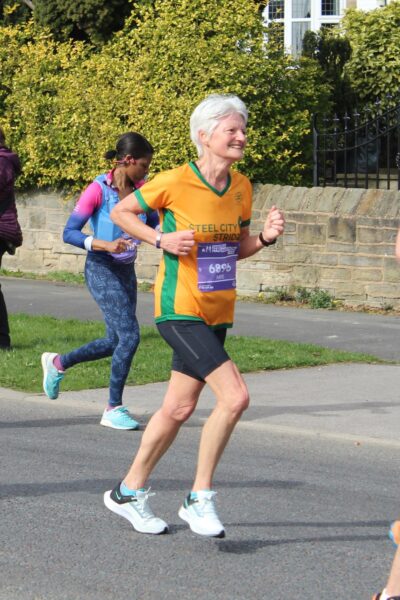 The M70+ category was a new addition last year, and no one did enough races to win it. There’s definitely potential for a great competition here if people would like one though. At Dronfield, Graham Hague was 20 seconds and 0.4 points ahead of David Parry. In Sheffield, Chris Reece was exactly 1 minute and 0.5 points ahead of Graham. And if you can get around Sheffield Half, you can get around any course… 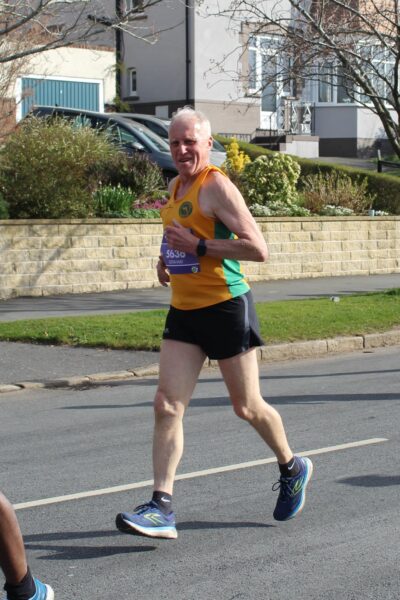 Helen Eberlin joined Sheena Woodhead, who ran in Dronfield, on the F70 table. Sheena holds on to the lead, but by less than a point. 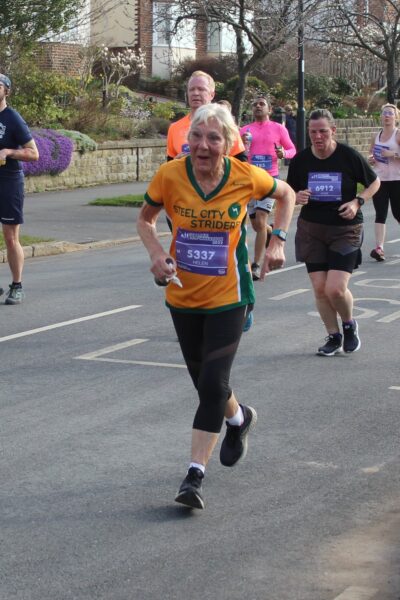 The next race in the championship is the Holymoorside 10k on May 8th. This race is like the Sheffield Half in miniature, with a relentless climb in the first half setting up a joyous descent in the second. There’s a 2k fun run around playing fields too, entry £2, so Striders with families may want to consider bringing their kids along. Entry is still open.

In the meantime, the Fell Champs will get underway at Kinder Downfall on April 17th, and the Trail Champs at the Cat Lane Canter on April 24th.

This may be a good moment to mention that alongside our official Striders championships this year, there’s an unofficial, all-terrain super-championship. For that, your best 3 scores from each of the Road, Trail, and Fell Champs will count. We won’t be sullying the achievements of winners by giving them prizes—think of it as the Striders equivalent of an Olympic demonstration sport—but if you like a bit of variety in your running, why not take in a few trail and fell races and give this a go? You’ll be able to keep an eye on the scores here.