The few days leading up to the inaugural Winter Edition were quite dramatic, with the Event Facebook page alternatively filling us with trepidation and encouragement- one day photos of deep snow, the next day Matt Rimmer galloping fearlessly down Limb Valley bathed in a golden glow. However, Sunday morning dawned with ideal conditions- not too cold, and no rain, snow or wind.

The weeks before had made it muddy, but that was to be expected, and the only really icy part that slowed you down was the top of Limb Valley, so I think we got away with it quite well for January, and at least didn’t have the draining heat of the summer. It would have been tricky without trail shoes but was quite manageable with them.

On arrival at Endcliffe park for my 8.45 start it was busy, but only small queues to get the timing device. Met a few Striders including Kevin Wong who offered to run with me, so we said we would see how it worked out, and I set off before him while he was faffing with his luggage (wasn’t going to let him get away with an easy run all the way round!) He caught me up by end of Stage 2, that bit was hard, as it usually is, with different speeds going up the last rocky hill, and not much room to overtake for the faster runners. Then we stuck together, or rather he ran and I tried to keep up, then he waited at the end of the stage, quite a good system I think.

For me, it did actually work out how it describes in the blurb, which I was a bit dubious about beforehand, – but we did keep bumping into people at the walking points, which was a really enjoyable aspect of the event. By Chancet Wood a few later starters had caught up, Nada, then Chris and Cara, and we kept them in sight to the end. Once Graves was out of the way I was pleasantly surprised that I still felt human, and the Feedpoint there was bustling and sociable, with Sara Copp’s using her vocal skills to get people to put their rubbish in the right place.

Norton Lees is a great section, I love that run down, as I did it a lot in lockdown with the Cat Lane Canter routes, then we met Kate Scott and Dave Beech and witnessed Kate’s spectacular paratrooper roll down Meersbrook grass, she just bounced up and carried on. Then just Brincliffe Edge to do, where after seeing Cath Ager and Jo Rose marshalling cheerfully, I tried to pretend it was just the beginning of a Heeley Monday run. (except one where I was a bit tired)

At the finish it was well organised with plenty going on, although more of a Glastonbury in the mud festival than a sitting on the grass festival, just a bit cold to stay long really. But a great, really well organised event. I was happy with my time- I didn’t know how it would compare to a Half Marathon time, as the distance is slightly less, and the walking breaks really help (for me anyway, maybe not if you just like to keep going), but the conditions are tougher. I was 10 mins less than a Half, so was happy with that, I think chasing after Kev helped!! 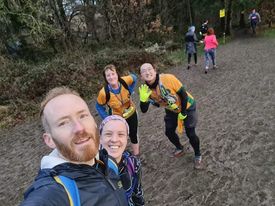 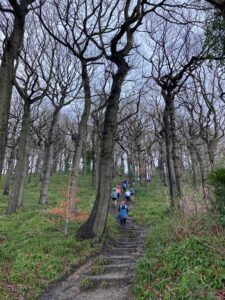 Club Results – Top 3 Pairs of each category of the same club.  Striders came first for Male Team, and 2nd for Mixed Team.

For details of stage timings and full results see https://www.sportident.co.uk/results/Kandoo/2022/RSR-Winter/index.html