Curly’s Athletes have been delivering their “Run for Wildlife” events at, and raising money for, the Yorkshire Wildlife Park Foundation since 2016. Originally a twice-yearly 5k, following the Covid-19 hiatus during which the option for virtual events was introduced, the 5k continues during Autumn and a new 10k event was brought in for Spring, the first one of which took place on April 24th 2022.

Despite some issues with traffic getting into the park, the event continued in the Curly’s tradition of superbly organised, inclusive events. This time there was even more potential for operational chaos as in addition to the main 10k event some participants who had signed up for last year’s cancelled 5k event were able to take part in a smaller “VIP” 5k which started about 20 minutes after the 10k. However, there were no problems and both events ran like clockwork (well, certainly it felt that way to me!).

There was a slightly delayed start due to the traffic issues, but the main 10k event set off shortly after 8:30 on a multi-terrain, winding route which gave the 1000+ runners views of many of the park’s residents including red pandas, hyenas, giraffes, lions, zebras, painted dogs and a real close-up of the young polar bears! The atmosphere was fantastic all the way round, and the marshals and all the race team helped create a really magical and memorable event.

The 5k offered similar viewing opportunities to the 10k, and the lead bike made sure the front runners from the shorter event could easily navigate their way through the 10k participants.

The next Run for Wildlife event is the Autumn 5k which takes place on 9th October.

10 Striders were recorded as completing the 10k (although it looks like Denise ran it twice!) which was won by Stuart Spencer of Fitmums and Friends in 33:17. First female was Sarah Imbush of Hillsborough and Rivelin Running Club in 42:08. 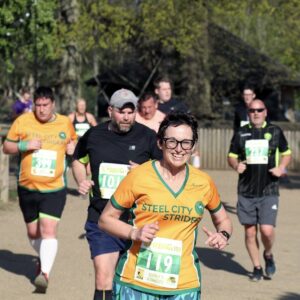 Full results here: Run for Wildlife 5k & 10k (racetimingsolutions.co.uk). It appears no Steel City Striders ran the 5k which was won by Isaac Smith. I’ve only mentioned it as he’s my son is  no longer in Hallamshire Harriers as recorded on the results, so I might be getting him a green and gold vest for his 18th birthday in October if he’s really lucky!