With Dronfield 10k results published, it’s time for the second update of this year’s Road League. Over 80 Striders were in action on Sunday, with the vast majority also entered in the Road Leagues, so lets see how the Divisions are shaping up.

Division One – The Hendo’s Premiership

Rob Byers secured another 20 point performance, on his way to winning the race. Abbie Pearse and Malcolm Baggaley occupy the other podium positions, having raced at both the season’s two races to date. Strong performances from Richard Pearson, Adrian Fisher, Michael Cockings and Stephen Schubeler suggested that they’re also going to be in the mix this year.

Another division where a relatively new member is leading the way. Laura Mella produced a second strong performance to top the Division after two rounds. Another strong performance from Jonathan Legon too, whilst Russell Stevenson and Neil Schofield (on post-XC legs) suggested that they could be a threat for the top spot too. Robin Nelson, Richard Pegg and myself all demonstrated the benefit of getting two races in early, though we may struggle to maintain this lofty status as the season continues.

Sarah Allcard tops the league after two strong performances. It was Jim Rangeley who claimed the 20 points at Dronfield though, despite some fairly unorthodox training on Saturday. This looks like a really tight division at the moment, with the top eight runners finishing within three minutes of each other on Sunday.

The League system can be cruel; Kevin Wong managed to run 30 seconds faster at Dronfield than at the pancake flat Valentines 10k, but this time he came away with just eleven points, having secured seventeen at the first race. Helen Royles-Jones and Steve Blake top the division after two good performances, but Jamie Smith, Matt Robinson and Mark Norman all look to be ones to watch.

Nada Ross produced another strong performance to top the table at this point. However Stephanie Street and Ian Blackburn demonstrated the positive effect of all those Tuesday mornings from Millhouses, with a one, two at Dronfield. Graham Hague also turned in a time that suggested he’ll be in the mix this season.

Still the busiest League, with just four runners still to record a score this season. The top 5 have all recorded two scores already, leaving Jane Huws just one point ahead of Adrian Good. However the four quickest times in the Division at Dronfield were all from runners who’ve only run once so far – Kimberley McPherson and Sarah Copp will be eyeing up the top of the League for sure.

So, it’s on to the next round; the Sheffield Half will surely see a big turnout, but some will be pacing and some may welcome that hill, whilst others may dreading it. 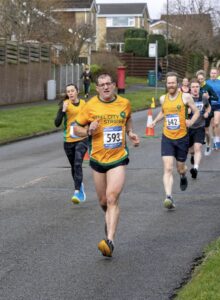