‘Too loopy’ was one of the comments after the Bradway Trail 10 trial run last year. ‘I didn’t know which way to go’ was another

So the first official Bradway Trail 10 race last weekend (after our supporters at Sheffield Council gave the course the thumbs up) aimed for more signs and fewer loops.

60 runners (including unlisted back markers, sign gatherers and dawn course flaggers) braved the slopes between the River Sheaf and Bradway Recreation Ground on Sunday, on a revised 9 and a bit k course, which still offered several opportunities to fall in the river but, after liaising with the very helpful Abbeydale Golf Club, a much lower risk of golf ball collisions.

One or two runners again went off-piste, and although we will probably stick now with last Sunday’s course, we will do our best to get more signs in place next time to help everyone on their way.

Organisers Richard and Kate had no flying gazebos this time, and many of the marvellous course marshals also helped out back at the Trail 10 Village, so thanks again to Jennie, Malcolm, Stephen, Neil, Catherine, Tony, Philippa, Naomi, Peter H, Alice, Peter E and Chris. It would be great if runners think about volunteering as a marshal every now and then too – watch the Steel City Trail 10 FB site for more details.

From now on, we aim to have a Trail 10 run on the third Sunday of every month, some will be races this year, some will be trial runs until we get more routes cleared by the council and local ecologists.

The runs will always be pretty challenging, with lots of mud and hills and bumps, but with the aim of going at your own pace, whether that’s as fast as you can or just trying to get round in one piece, and maybe walking the tricky bits.

The runs will be within the city, fairly easy to get to by walking running or cycling there, and we’ll be keeping off road as much as we can. So, in many cases, there will have to be loops to avoid main roads, and they won’t all be 10k. But we hope all the routes will be fun, and introduce some of you to a few paths and trails you hadn’t run before.

We’ll also be keeping a close eye on conservation of the Outdoor City’s green spaces, and avoiding some routes at sensitive times – this is why we’re trying to do some moorland routes before the spring, when rarer nesting birds arrive. This time we raised nearly £80 for local conservation groups – thanks to all who put a few quid in our bucket.

The next Steel City Trail 10 is on Sunday February 20th, and rumour is it will be the most terrible, muddy, and hilly route yet. Watch out everyone. 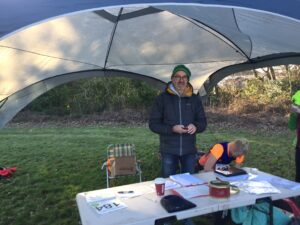