The new Steel City Trail 10 route at Bradway is less loopy, but just as hilly, and now there’s even more chance of getting your feet wet in the River Sheaf too.

“Fantastic amendments to the course to make it as smooth as possible,” said SCT10 regular (and often winner) Allan Shaw of Vegan Runners.

As usual, there was a big spread of participant speeds, with welcome relief from the hot weather in the woodland sections and at least 3 runners from a Striders 5-10K course happily joined in the fun for their first 10k trail run.

The route takes in several ancient woodlands, starting at Bradway Recreation Ground, descending the Beauchief Drive byway, then diving into Nether Wood, Ladies Spring Wood, High Wood, Gulley’s Wood and Old Park Wood (among others). We think it also offers the most spectacular views of Sheffield’s namesake river most of us have never seen. And the running is fun too, with plenty of traditional bumpy paths. The dry weather this month meant there was less mud than usual, but more nettles.

This is one of the two official and fixed routes for the trail race series which usually takes place on the 3rd Sunday of the month. (The exception next month  – July 24th – is to accommodate the Striders 40th birthday trail race at Bradfield).

We’re aiming for tricky routes that are just as much fun for seasoned fell runners as for newcomers to trail running and say everyone’s welcome to get round as fast (or as slow) as they like, and walking tricky or hills bits is always fine.

The runs aim to showcase routes of approximately 10K on less will known paths around the city, with all accessible by public transport. One new competitor put the idea in a nutshell: “Amazing how much running you can tuck into a little piece of land!”

As usual. generous runners made donations for local conservation groups with just over £50 raised, which we aim to donate to Beauchief Environment Group at our next run in the area.

Our Steel City Trail 10 schedule, including some trial runs of as yet unofficial routes, is now (hopefully): July 24 (Wincobank), August 21st (Porter Valley), September 18th (Parkwood Springs), Oct 16th (Shire Brook), Nov 20th (Whirlow). Do come and join in these runs (as runner or volunteer) when you get chance, open to members of any club or none. More info on the Steel City Trail 10 FB page. 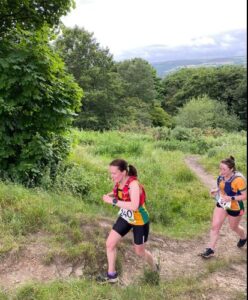