“We few, we happy few….” The sight of grinning peat-spattered runners being blown off Rud Hill last Sunday inevitably brought Agincourt to mind for some watching marshals.

Peggy the king, Scotty the queen and Burnsy the Prince handled things down at run HQ near Forge Dam, but the rest of the band of brothers and sisters, Rea, Brock, Haake, Bell, Walsh, Evans (x2),Lee and Gleig – what feats they did that day.

The fourth route of the Steel City Trail 10 series conveniently fell between the coat tails of Storm Eunice and the headwinds of Storm Franklin, so runners and brave marshals had constant rain and varying icy winds to endure as the course wound its way up the Porter Clough and out onto the moors and bogs of Brown Edge and Rud Hill, then back down again.

“This run had everything,” said a visiting mother and daughter from Leeds, pointing out their grinning social media selfie was taken in “needle rain – but we were having a great time.”

Three students in shorts and challenging footwear slithered round for a 10k university course challenge (no one had the heart to tell them it was actually 9k this time) along with the usual SCT10 variety of fast, medium and ‘I’m just enjoying it in my own time, to be honest’  runners, with 36 participants (including Nick B who’d been out flagging the route in dawn’s early light) taking part.

This was another trial run of the regular series celebrating the Outdoor City’s countryside and its diverse trails and pathways, which usually take place on the 3rd Sunday of the month. We have two approved routes so far (Bradway and Whirlow), we’re waiting to hear about Redmires and the new Porter route, and will have more trial runs and official races coming up this year in other parts of the city: keep your eye on the Steel City Trail 10 FB page for updates.

Participants praised the marshals and were called bonkers by their stay at home mates on social media afterwards, but the red faced, brown legged runners and volunteers back at Forge Dam knew where they’d rather be on a stormy February morning. As posts from several of them suggested after they’d cheerily conquered the moors before lunchtime, gentlefolk in Sheffield now a-bed, shall think themselves accursed they were not there.

At least until the next one on 20th March, that is, when maybe there’ll be another storm or two waiting. 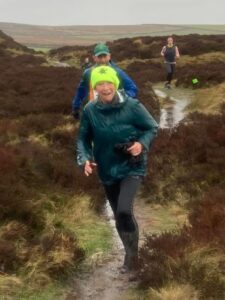