From the start line next to a couple of tons of farm manure, just over 100 runners (and a dozen volunteers) trialled the next Steel City Trail 10 route on Sunday 2nd September.

This was not a race (we bellowed at the runners) but nevertheless, Andy Eades of Vegan Runners managed to squelch his way round the roughly 10.2k course in 45.30, with the Striders’ Paul Middlemas close behind at 45.50, followed by Strider Matt Rimmer at 47.45. Strider Abbie Pearse was the first woman home at 49.37, followed by Natasha Dawson of SY Police RC at 52.00, then Strider Sian Evans at 57.31.

But it was not a race, as mentioned, so the scores of muddy runners, from many local clubs and unattached, who actually made it round the trails of Wyming Brook and the bog fests of Redmires should also be celebrated.

The aim of the Steel City Trail 10 series is to offer challenging runs around some of the lesser known paths and trails of the Outdoor City, where going fast or just aiming to get round are just as important.

We’re hoping to get clearance for an official race at Redmires in a few months time, all being well, and meanwhile after the next Steel City Trail 10 races on Jan 30th and Feb 20th (probably at Whirlowbrook Park and Bradway / Ladies Spring Wood) we will have either a race or trial run on the 3rd Sunday of every month. By the end of the year, we hope to have 5 or 6 routes in action around Sheffield – see the Steel City Trail 10 FB page for updates.

Dozens of runners thanked the hardworking and cheerful volunteers who could have been sat out in howling winter gales, rather than the winter sun of the day (thanks Alex & family, Jo, Ben, Nicky, Caroline, Dave, Sally, Alice, Peter, Steve and Stephen). Organisers Richard, Kate and Nick had their own challenges with a flying gazebo during the sign up process.

The event also tied in with the HRRC Foodbank Relay taking place the following day, with several bags of provisions for the S6 Foodbank collected from generous Redmires runners, along with over £150 raised for local conservation groups working in the area of the run.

But the big achievement for us all was hearing people who’d never braved a route like that before saying how pleased they were to make it round. Comments on the FB site included: “That was way out of my comfort zone and I found it incredibly difficult till about half way, but as always the marshals and my fellow runners made it enjoyable (almost!) Seriously, thanks very much from a confirmed tarmac lover!” “Think I’ll be riding high on endorphins for the rest of the day.”

And one walker striding off the swamps above Headstone Bank commented: “I’ve never seen so many runners with smiles on their faces.”

Thanks everyone for taking part, and you’re all very welcome to join us one way or another in future. 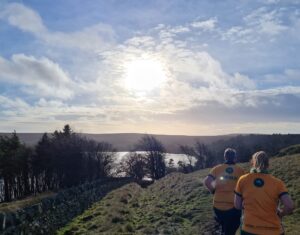