We thought it best not to advertise the fact that last Sunday’s latest Steel City Trail 10 route was through an old sewage works, taking in detours over a former colliery spoil heap and a rubbish dump “A hidden gem” said participants, unaware of the site’s history.

The Shire Brook Valley is now a nature reserve, full of spring flowers and herons observing the 32 runners passing by last Sunday.

This was the 6th route in the series aiming for a spectacular (but challenging) trail race every month on the doorstep of local runners. We’re aiming for the 3rd Sunday of every month, usually starting around 9ish in the morning, with a route suitable for fast fell runners and trail newcomers, with joggers and occasional walkers just as welcome as anyone striving to get round an undulating, bumpy, tricky and often boggy 10K (ish) course

We’re working with Sheffield Council on these events to promote new routes for local runners, and to support local voluntary groups helping to look after these areas. On Sunday, the Shire Brook Valley Heritage Group were there to support the run from their visitor centre with tea and coffee: they’re keen to promote their beautiful site to Sheffielders who’ve never visited before.  (For anyone who fancies a bit of ‘balsam bashing,’ with the kids, maybe, you can call in at 10am on Wednesdays from 15th June to 13th July, to root out Himalayan Balsam, a vigorous invasive species which shades out native wildflowers and makes a satisfying pop when squelched).

Generous runners raised £104.15 for the voluntary group, which they say will go towards improving the visitor centre’s education displays for visiting schoolchildren learning about local wildlife.

Sunday’s ‘trial run’ aimed to test the route, along the valley and up the nearby Silkstone Ravine, and we only had two runners make a brief wrong turning (we’ll improve signage next time). The route here was designed by Jo Gleig (thanks Jo) inspired by one put together by some of her colleagues at the brilliant Not the Cat Lane Canter group, who designed a series of routes during lockdown, still available on their website at https://catlane.to-lo.co.uk

Malcolm Baggaley also did a sterling job sorting out all the marshals, so thanks to him and the team:  Stephen Oldfield, Nicole & Graham Nield, Lisa & Clark Bownes, Steve Blake, Jim Eberlin, Catherine McKeown, Tom Cossham, Neil Schofield and Nick Burns.

I didn’t wake up refreshed that Sunday morning, after watching the Eurovision and the eldest waking up too many times, but as soon as I stepped out of the car in Shire Brook valley, I knew this was the place to be at this moment in time. The air felt fresh and clean from recent rain, it wasn’t cold, the spring leaves shining in their display of greens gratefully having quenched their thirst.

This was the first trail 10 date I could do so my first time pinning on the “number for life”, and I was the 262rd runner to have such a number now. Cameraderie was palpable on this Sunday morning outing to run through Sheffield’s urban green space. I felt not many, me included, had ventured into the shire brook valley before.

There was a short delay waiting for the race director, which lead to some talk about Spanish bums. 10 minutes later we were led down into a magical mystical atrium from inside which the run started from. It felt like that all the way for me – a hidden, untouched forest, full of different types of trails, gravelly leading up onto stunning views, root-ey woodland trails, and straight flat and easy cycling paths. And all of this just fifteen minutes drive from home. A highlight was running past the hidden Birley Spa Bath house.

Compared to others in the Steel Trail 10 Series, this run had less climbs, but still ample to get the heart going. Malcolm had warned us at the start about „the stinger“ at km 7 (I loved that expression), which indeed stung appropriately, and descended downhill just as steeply pretty much straight after reaching the top. Felt like a stinger, looked like a stinger on the elevation map – fun!

Post-race we had a nice chat with the lady from the Shire Brook Valley information stand; I took home and map and will be coming back!

Finally I got to give the race winner (Allan from Vegan Runners) a lift back home so could indulge in some good post run chat. I love how events like these make for nice inter-club connections; Allan had been running all of the races in the series so far, and really enjoying them. As a slower runner I also felt well supported – a recommended run/race thus for all kind of runner types. 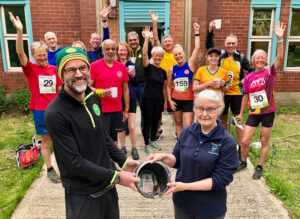