When you think of places in Sheffield where you can enjoy uninterrupted views over the city, gorgeously varied trails and a real escape into nature, Wincobank probably isn’t the first place that springs to mind. But that is where the Steel City Trail 10k series comes in! Open to all runners, very inclusive, and a brilliant way to explore new areas of our wonderful hometown, I’d really recommend them – look them up on Facebook if they aren’t something you’re already familiar with.

A lovely dry, crisp morning dawned for the first “official” run of this route (and on the first official day of Spring too!), a trial version of what will hopefully soon become part of a series of races. The route was put forward by Strider Malcolm Baggaley, who is local to the area and definitely deserves a huge thank you for sharing it with us all! The starting point was described as “the top of Wincobank Hill”, and as we drove up Jenkin Road (of Cote de Jenkin Tour de Yorkshire fame) we began to realise that this was definitely going to be what you might call “undulating”.

The course is a two and a bit lapper, with a little loop taking you steeply down to a road and back very steeply up the other side at both the start and the end of the race. In between this we were treated to 5km of technical rocky downs, lovely flat bits of grassy fields, pleasant woodland trails (including some bonus steeplechase-esque log jumping fun) and uphills so steep I felt like I might have been on an episode of Gladiators, but instead of Wolf at the top I had the smiling face of Neil Schofield. All this amidst the surroundings of an Iron Age hill fort too, which is believed to be part of the same line of defense as the somewhat better known Carl Wark out in the peaks. The historian in me was delighted.

It certainly wasn’t my finest running – a step class which felt totally normal and fine at the time a couple of days before had done something horrible to my calves, and a pessimistic weather forecast meant I was drastically overdressed in a fleecy base layer (impossible to remove elegantly, and very tricky to remove even inelegantly, so I just kept it on and cooked a bit), so there was lots of walking for me, but that just meant more time to enjoy the route – which I believe I described to Malcolm as “brilliant, but horrible, in a good way” as I passed him at HQ on the way to start lap 2. The route was well signposted and relatively easy to follow, with super marshals at well placed intervals. And did I mention there were hills? My Strava gave me over 350m of climb over 10k, which I think is my hilliest run ever by ratio. So definitely a fantastic route to get those legs going and give yourself a fun challenge.

Overall, a great atmosphere with a friendly bunch of volunteers and runners and another fab addition to the Steel City Trail series. I believe the aim is that these runs will take place on the 3rd Sunday of every month, rotating around a variety of routes – and I already can’t wait for the next one.

The men’s race was won by Allan Shaw of Vegan Runners in 51.18. The female race by Strider Naomi Tuckett (2nd overall) in 54.20 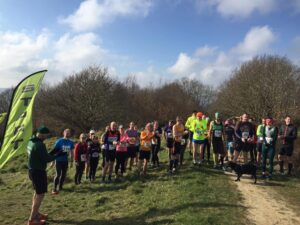