There might not be many good things to say about the past 2 years, but one positive outcome for me was the growing importance of running for my physical, mental and social wellbeing. With group runs and races unable to go ahead (two of my main motivations for getting out of the door), it would have been all too easy to hang up the running shoes – but fortunately, the power of social media and internet friendships helped to keep me pounding out the miles, along with the patience of my husband Jim. When one of us wanted to crash on the sofa and wallow, the other would encourage, and we managed to build doorstep runs, speed sessions and other such virtual challenges into our daily lives – often with the justification that the pubs were shut, so what else were we meant to do?!
As well as (of course) the Steel City Striders Facebook page, a key motivator and voice of support, enthusiasm and encouragement was our friend Olly, who runs Swift Run Coaching (find him on Twitter @swiftruncoach). Olly has built up a wonderful community of athletes of all abilities which spans across the country, so the fact that he’s based in Staffordshire and that neither of us had previously actually met him in person didn’t matter one jot in the days of lockdown and social distancing, when friends made over the internet proved themselves to be just as valuable relationships to those who live just a few doors down.
Back in May 2021, Olly organised a virtual race – The Swift Run. A one hour time trial, to be run over the Bank Holiday weekend at a location of your choosing, simply as far as you can go within the 60 minutes. As I’ve mentioned already, I was really missing in person races and so signed up to this to give myself a reason to properly push and see what I could do. 2 and a bit laps of Rother Valley on the day all the local colleges broke up probably wasn’t my wisest choice of venue, but I managed to dodge the increasingly drunken teenagers to get myself a 10k PB at the time. I was elated with what I achieved, and it really was the next best thing to a real life event, participants even got a finisher’s t-shirt!
Sadly we weren’t able to run when the second rendition of the event went ahead, but with Swift Run 3 planned for Easter weekend this year I simply had to sign up again and have a go at bettering my previous distance, knowing that my running has improved a fair bit since last May (despite us taking regular advantage of pubs being open again… support your locals, pals!). Also, the tee this time was inspired by Jurassic Park, so I absolutely couldn’t resist.
Unfortunately I had a bit of a setback when on the first day of the 5 day race window, instead of running I opted for a spin class, where I pulled a muscle in my calf. I wasn’t sure I’d be able to run at all, but was confident to give it a go by Sunday knowing that as long as I kept moving in some way for the hour, I would have completed the challenge and knew that Olly would be supportive of us no matter how far we got, as long as we’d given it our best shot.
Resisting the urge to find the top of a really big hill to run down, we headed back to Rother Valley with the logic that it’s flat and there are no pesky roads to cross. Everything luckily felt ok when I set off and my first 5k was strong. With it being a sunny weekend, Rother Valley was getting pretty busy by the time I’d done a lap of the bigger lake and I was starting to get grumpy getting stuck behind crowds, so I chose a slightly different route and headed down the TransPennine Trail for part of my run instead. I started to fade over the second half of the run, with the heat getting to me a little, overthinking about my leg, and regretting not carrying any water, but I still managed to add a tiny bit of distance onto my previous effort – not a 10k PB this time, but not too far off, and enough for 2nd female!
All in all, while I’m very pleased that club nights and in person races are back, I definitely think there’s still a place for this sort of thing too – our “internet friends” are as important now as they were during lockdown, and I just hope we get a few more opportunities to run with Olly himself in the future!
Two Steel City Striders took part in the 1hour time trial
Jim Rangeley, who came 4th overall with a distance of 7.93 miles, and
Laura Rangeley (2nd female) with  7.09 miles.
The winner was Ben Bewley of Newcastle (Staffs) AC, who ran 8.93 miles in the allotted time.
Full results can be found here: https://my.raceresult.com/192619/results
*No race pics sadly as we were running solo but I’ve attached a pic of the race top we’ll get! 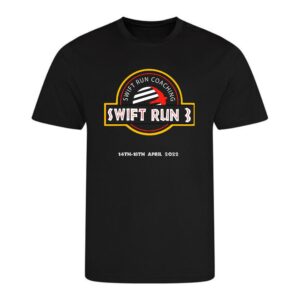