For those that don’t know, the SYCAA series is four Wednesday Night 5 mile road races where it’s about the individual and club competition for finishing positions. This year the races are at Lodge Moor, Worsborough and Penistone, with Lodge Moor holding two rounds this year. The course is a hilly one, with 500ft of elevation packed into the 5 miles.

Arriving at the start we were greeted with cold temperatures, a strong breeze and sleet showers rolling in. The weather didn’t get much better as we “warmed up” and assembled at the start. After a quick briefing and a fast call to the line we were under way.

From the start straight we were up the first little rise on Soughley lane and then another level section until we started the first main climb up Roper Hill. Off the top of Roper Hill it was then a long meandering downhill, made harder by the icy weather coming straight at your face! The downhill lasted until the three mile point where the climbing started again to bring us back to the bottom of Roper hill. Then it was the reverse of the first mile and a fast run back to the finish.

The competition was pretty good through the field, and just as with cross country racing people seemed able to find their pace and competition then race it out with those around them. The conditions made it pretty challenging for a short road race, but there were many good performances across the board and lots of smiles at the finish!

Overall the races were won by Joe Sweetnam-Powell (Sheffield Running Club) in 28:26 and Strider’s own Abbie Pearse in 32:06. First male Strider home was Richard Pearson in 29:39 and 11th place.

It’s always a big thanks to the marshalls and officials, but a special thanks to the hardy souls who stood out in the sleet and cold to direct us and cheer us around! I was cold under 3 layers while running so it must have been freezing for those who were standing still! 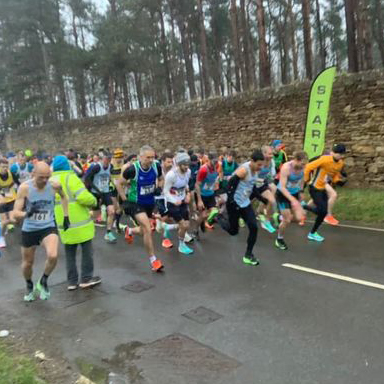 SYARRL race no.1 gets underway