The first three South Yorkshire Road League fixtures were packed into a 21 day period and the third race was at Lodge Moor again, giving the racers another chance to tackle the challenging course, this time in the sunshine and warmth rather than the snow! Although I don’t think it was the plan to repeat venues, I really enjoyed the chance to test out my fitness on the same course and see just how much of a difference the conditions had made last time.

The course at Lodge Moor is dominated by the two big uphills at 1 and 3 miles and the long downhill linking them. The final mile is slightly downhill and can be very fast if you are feeling good, but it’s not easy to produce a good finish after the long haul out of the Mayfield Valley.

In general everything was a bit more relaxed this time around with the sun shining and no-one freezing it was a much more relaxed build up and start. Personally, I had a much better run this time around and was a full minute faster than that first fixture with a corresponding improvement in positions!

This time around the win went to Gareth Cooke of Barnsley AC in 28:22. First Strider home overall was Richard Pearson in 29:14 and 10th place. Winner of the women’s race was once again Striders’ Abbie Pearse in 31:34, with Gillian Allen coming in third female with a strong run.

It was really nice to see lots of Striders vests out and about at this race and throughout the series and there was a great atmosphere before and after the race. There’s something great about racing in the evening with the sun setting and the temperature just beginning to cool a little bit creating ideal racing conditions. 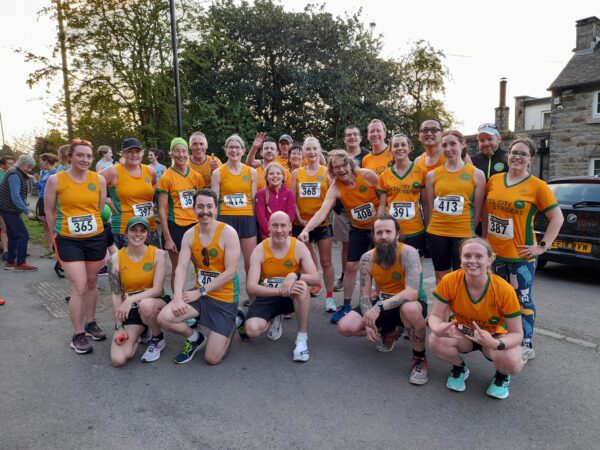 Heading into the final round there are several Striders in the top 3 of their categories.

Abbie Pearse leads the women’s category overall with a large 3 minute gap over the next competitor. Gillian Allen sits third, with a 1:30 advantage over fourth. Fiona Jeffries leads the FV50 competition with a gap of over 10 minutes to second and Jo Gleig is leading the FV60 competition by a large margin over second. Al Cook is in second in the MV50 category with over a minute on the third place competitor, Des Ryan is looking good for a podium spot in the MV55 category and Kevin Haighton is in a similar position in the MV60 category.

Above results compiled from feedback to this first draft; will be updated in due course.