Announced as the Commonwealth and European Games qualifier, the 2022 Manchester Marathon saw a bumper crowd of high quality athletes looking to secure a national vest. This included Hallamshire’s Andrew Heyes who was selected to run for GB in Berlin thanks to his impressive 02:13:52. Self-styled as the UK’s flattest and friendliest marathon it also attracted an array of club runners in search of a fast marathon time. This included over 30 Steel City Striders who braved the trip over the Pennines including Rob Byers (spotted stalking the second woman on race TV ed.) who broke the senior men’s record in a ridiculously good time of 02:29:52 plus Kate Waddicor and Dave Beech who broke the respective FV65 and MV65 records.

On race morning a plethora of sleep deprived and agitated runners made their way to a holding zone a couple of hundred metres from the start. For many, a short tram ride and walk was the easiest way to get there from hotels or car parks further afield. A bag drop was also available for those who needed it. Once in the holding zone the atmosphere buzzed with contentment at the near perfect running conditions. Despite the ideal weather, as we waited to be called forward my own anxiety levels felt akin to being outside an A-level Maths exam hall years before. However, on this occasion I had prepared properly for the test and felt surprisingly confident. Thirty minutes spent sitting thinking about what lay ahead nearly put an end to this confidence. The foreboding felt here was worse now than at any point during the race. It was therefore a relief when we were called forward for the short walk to the start area.

The 2022 course began on Talbot Road, a stone’s throw away from Old Trafford, the competitors presumably hoping for better performances than those that the occupying football team have had had this season. Once the first couple of waves were in place the racing commenced with the wheelchairs at 09:00 and the elite/white wave at 09:05. Over the course of the morning the start line saw over 14000 unfortunate souls pass over it. Each had their own reasons for crossing that line, even if many were to re-evaluate those reasons twenty miles later.

Mile 1 was surreal. Adrenaline levels were through the roof and containing excitement was the sole goal of many at this point as setting off too quickly can ruin even the best athlete’s marathon. In Manchester this culminated in thousands of competitors checking their watches with the frequency of the White Rabbit although very few needed to fear being late to the first mile marker. As it turned out, neither did I. Against all expectations and previous convictions for setting off like an idiot, the first mile was bang on target at 5:53.

From the start the course looped for a couple of miles around the Old Trafford area before unravelling northwest towards a 180 degree turn in Manchester City Centre. After agreeing with another runner’s statement, hoping there were not many more double backs, my first gel was downed and started to worry that the gloves (used mainly for gel storage) weren’t necessary in the unexpected Manchester heat; being from Yorkshire I couldn’t throw these away. 10k and the first timing mat were passed in in 36.21, a tad faster than planned. Fortunately, aforementioned poor maths skills meant I was unaware of this folly and continued on blissfully ignorant.

My partner recently told me that my Mr Men equivalent is Mr Grumble. Perhaps then it shouldn’t have been a surprise that I had a growing list of complaints early on in the race. This made the next 7 miles back past the start line and towards Sale and the half marathon point mentally challenging. The chief grumble during this period was experienced at 10 miles with the realisation that I still had 16 left to go. This felt far too long and quite frankly unfair considering I had run so far already. Added to this, constantly overtaking or being overtook meant I was concerned about my pacing, I needed to use the facilities, I’d missed an opportunity to pick a gel up and I felt even more overdressed in my gloves and arm warmers. As I began to consider the possibility, albeit slim, that my girlfriend had a point, I reached halfway and my race experience changed. 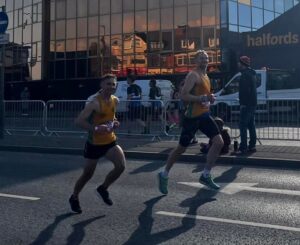 Runner’s high is an experience few people outside running believe in. When suggesting it exists to the average non-runner you can be looked at as if you are suggesting the wildest conspiracy theory. However, on this occasion, fully embracing my tin foil hat, I swear I had the high. Passing 13.1 bang on target, a few seconds under 77 minutes, my marathon changed. All of a sudden it didn’t matter that I’d missed a gel and that there was still a way to go. As I commented ‘It’s all downhill from here’ to a runner, I had somehow flicked a switch and the next 6 miles flew by. The only hill at 16 miles in Altrincham, near the course’s furthest point west, didn’t seem to make an impact. As I passed the final checkpoint at 30km in 1:49:24 (over a minute quicker than at Stamford 30k in February) body and mind were synchronised, it felt so easy and all was good in the world. Unfortunately, not all good things can last.

Not many people I’ve met have enjoyed the last 6 miles of a marathon. To most mortals it’s a slog. Your body begins to shut down and each stride takes more effort, lasts longer and doesn’t seem to get you as far as the one before. This was my experience, as the course made its way northwest, via Baguley, Sale Moor and Turn Moss, and back toward the finish. Every mile marker appeared to be placed further apart and I began to count down the distance in ever smaller chunks, my favourite being laps of a track. Sadly, as my perception of time slowed, so did my pace and I was no longer hitting the sub 6 minute miles needed to hit my A target of the then senior men’s record of 2:34:36. I clung on as best I could, despite the ever increasing pain, in the hope I had put enough in the bank early on to achieve my goal.

Hoka’s ‘time to fly zone’, appearing like a false finish line just before 26 miles but not in sight of the finish was a misjudged affair. Many runners did not appreciate this as legs had seized up and the thought of speeding up seemed impossible. Indeed, after the race several runners proclaimed that they would never buy a pair of Hoka shoes again, such was their annoyance.

After not flying, I rounded the final left turn and saw the finish line and immediately knew my target was not possible. Miles 23-26 hadn’t been kind and my pace had dropped to an average just under 06:10 per mile for the period. Despite this, a glimmer of hope that I could break my B target of 2:35 remained and I began lumbering sprint finish. To my immense disappointment at the time, this saw me finish in 2:35:03 – seconds short of what I had hoped for. In the immediate aftermath of the race I recall feeling that those four seconds had made the months spent training pointless. This may seem bizarre, especially considering I’d only changed my target from 2:39 a month before after a good race at Retford, but it was the most distraught I’d ever felt upon finishing a race. 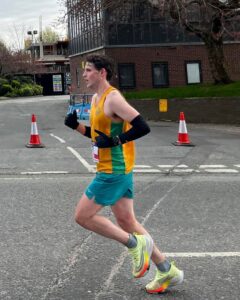 Sam lumbering towards the finish line

Luckily the next 30 minutes, spent learning what fellow training partners and Striders had achieved, distracted me from gloomy thoughts. More so than any race I’ve done, the marathon felt like a joint experience. The elation or dejection of other runners felt almost first hand due to the shared knowledge of how we had worked together to get to race day. Learning the great performances of others helped me get over disappointment on the day. However, on reflection and whilst now thinking rationally, I am delighted with my time and consider it one of my proudest running achievements. The only real downside is that I’ve now got a bug I never wanted and am already thinking about the next one, London 2023, where the plan is to be at least 4 seconds quicker.

For those interested, my training plan followed Pfitzenger’s methodology and revolved around high mileage with weeks topping out at 70 miles and more often than not included the following types of session:

Medium Long run (between 10-16 miles, often at a faster/tempo pace)

Long run, the staple, ranging between 16-23 miles, at about 80-90% of marathon pace. Manchester was early this year so the first 20 miler was on Christmas Day. (True, check his Strava ed.)

Training, especially the harder sessions, is so much easier when running in a group. (It’s no accident that nine of the ten fastest Striders at Manchester regularly train together ed.) Fortunately, I’ve been lucky enough to train with great runners from Striders, Mansfield Harriers and other clubs which helped me achieve my potential. I’d also add thanks here to Peter Brown and Mike Theobald for constantly supporting me by organising and attending training sessions. Many of the great times that the club has seen in recent years have been at least partly the result of the direction given by both.