I signed up for this 14 mile trail race ages ago, thinking that it would be a doddle as I thought I’d be running an ultra about now, so 14 miles, a walk in the park! However injury put paid to my plans and having strained my calf a couple of months ago this would be the furthest I have run since then.

As usual, the week before a race is always stressful, and this was no different. I’m suffering awfully with hayfever at the moment, then on top of this I came down with a nasty cold. As my legs still worked I nevertheless decided to go through with it. The weather Gods were on our side though, as the day before it had been scorchio, but race day was much cooler.

There was a good atmosphere at the start and a glimpse of the cakes waiting for us at the end was a good incentive to get the race done asap! Just about on time we set off at 11 am. After almost a lap of Rother Valley I found myself running by myself which wasn’t what I wanted, so I pushed on to catch up a group of about 6 runners. Once I caught them up I then decided I wasn’t happy with the pace as my breathing became laboured.

A lot of the route at this stage was just about single file and there were quite a few gates which made a consistent pace difficult. After 5 or 6 miles we had to cross a main road then push on towards the lakes. To be honest before half way I was struggling and all I could do was hang in there! Mind you a few other runners seemed to be in the same boat, and I overtook a few and a few overtook me. At last we arrived back at Rother Valley which meant another 2.5 miles round to the finish. This was quite a slog and just for once there was no sprint finish for me! 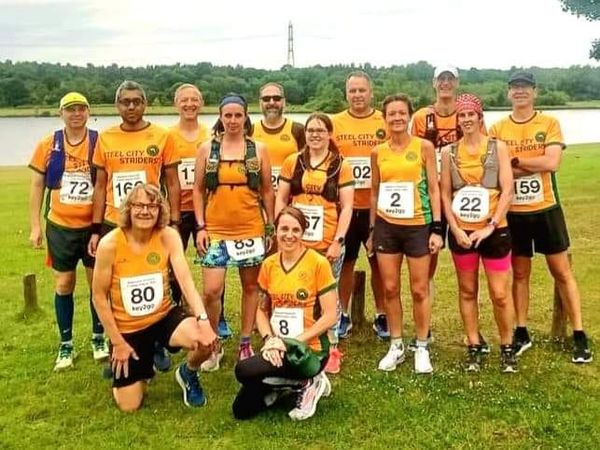 Striders at the Three Lakes Classic

Included in the goody bag was a nice mug which I quickly filled with coffee and went down well with a nice slab of cake. The race was great value, just £10. The marshals were very enthusiastic and helpful, it was well organised and I would definitely recommend giving it a go if you haven’t already.

Provisional results can be found on the Killamarsh Kestrels website.