I’ve never written a race report before, for various reasons…the main one being that I can never remember what happened!  That’s not because I have run so fast that it’s all a blur (far from it!). It’s more that my short-term memory is terrible (for which I blame the early 90s).

However, the Marsden to Edale fell race, better known as ‘Trigger’, I remember like it was yesterday (it was only Sunday so don’t be too impressed). It’s scarred on my brain and will haunt me like no other fell race has ever done, mainly because it is like no other fell race I have ever done.  It has so many more challenges than the majority of the local Peak District, £7 entry, cake at the finish fell races.  I hope that doesn’t come across as derogatory or in any way condescending as I really don’t intend it that way. After all, I absolutely love these races and can hand on heart say I look forward to them. But the Trigger is just…different. For a start, it’s approximately 24 miles and 1650m of climb, it requires navigation and has areas that are out of bounds.

The first challenge is one of the hardest (well, it is for me!), and that’s getting up at 5 a.m.  What’s that all about?! I thought only milkmen got up at that time! It’s such an early rise as the race starts at Marsden Cricket Club in Huddersfield at 8:30, and I need to be at Dore Station to catch the coach at 6 a.m.

The next challenge is trying to eat something at that time in the morning without it repeating on me / giving me stitch etc. during the race.  The more experienced / wiser competitors will be seen scoffing warm porridge from their flasks on the coach there. I will be that wise, clever porridge eater next year. You’ll see.

At 5:30am, my buddy/running partner Bob Hartley arrives to collect me, and we head for Dore to catch the coach that was so kindly sorted by Trigger-loving Simon Bayliss (who, incidentally, wasn’t running this year due to injury).  After a quick chinwag and register, we set off to Huddersfield, arriving not long after 7:15am.

On arrival, it’s off the coach and kit check.  Unlike a lot of fell races, where a nod and a wink will suffice, this one has a style that’s more…military in nature (just ask Jennie Stevens!).  Fair enough, as the race goes over some notoriously bleak landscape in the middle of winter. Once that’s over, it’s back on the coach to keep warm until the race starts.

The race, as mentioned, starts from Marsden Cricket Club and takes you around Butterley Resevoir and up to CP1 at Black Hill.  At only around 9km into the race I’m already really glad I put my neoprene socks on as my feet are as wet as an otter’s pocket. From here it’s across a very wet and boggy landscape to CP2 which is Crowden.

For the next few km you have a nice steady run around the reservoir with great visibility, giving you the perfect opportunity to take on some food before you head up to Higher Shelf Stones, which is the third highest point in the Peak District at 621mtrs and CP3.  This is where you are confronted with what I find the most challenging aspect of Trigger, which is mother nature.  As you climb up to Bleaklow, the temperature is notably dropping and I decide to put on a pair of massive gloves (think oven gloves on steroids) that I loaned from Mr Andy Green, mountain climber extraordinaire. I put just the one layer on, thinking that will suffice…how wrong I am! After checking our maps and realising we’ve missed CP3 by around 30 metres, we head East and find the welcoming faces of the legends that are the Woodhead Mountain Rescue team.

Now to head further East to find the TPT and onto CP4, Snake Top. Normally, this check point is everyone’s favourite…well, it is if you’re acquainted with Andy Green – his presence at the snake top with his warm glow and even warmer drinks is legendary. Sadly, though, he’s running RSR this year, so a small intake of jellybeans from a lady we don’t know will have to do.

This is probably the last and best place to bail out and, believe me, once we get on to Kinder, the highest point in the Peak District, there are parts of me that wish I had. Mainly my fingers and toes.  Bob (not that he mentions it at the time) is now feeling dizzy and lethargic due to the fact that he’s left his scotch eggs & flap jack in the glove box of his car! Whoops!  CP5 is Kinder North, Sandy Heys, which we thankfully find with ease. 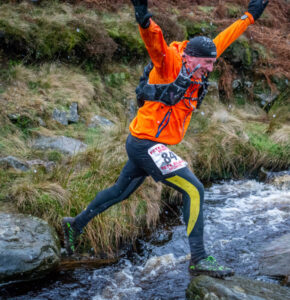 “It’s all downhill from here!” shout the mountain rescue team as we leave for a boggy trundle on Kinder.  At the edge of Kinder is Gridslow Knoll, and from here the visibility is far-reaching.  For the first time – probably since the start of the race – we take off our hats and descend into Edale, noting the increase in temperature as we do so.

The feeling you get when you finish this race is similar to that of your first marathon, it really is a sense of achievement, and once you’ve thawed out, then and only then can you begin to laugh about it.

Fellow Striders at the event were Myself, Bob Hartley, Jennie Stevens, Andrew Mansfield and Daniel Horner.