Saturday 4th June 2022 saw the 6th Uganda Marathon, with just one Strider in attendance. Redbull rank Uganda Marathon as no. 3 in the worlds best marathons, above London, and I now totally see why. The race was first established in 2015 and the only way for non-African participants to bag yourself a place is to take part in the weeklong adventure and fundraising event before the race. Fellow Strider Kate Kelly ran the event in 2019 and she gave me the courage to take the plunge along with some extraordinarily kind support from her school with my fundraising.  I travelled alone. This was the case for the majority of participants but soon enough we were all good friends and a true team. It was also a treat to be surrounded by fellow running geeks for a whole week!

The race had a 10k, Half Marathon or Marathon option. I chose the half option and it had a decent 350 metres elevation gain through the most spectacular and very rural route. The marathon was a second loop of the same course.

I tried to find information to make my race report very informative but with no joy, everything in Uganda was so very relaxed and unofficial! I would estimate around 2,000 participants ran in the event in total, mostly Ugandan and Kenyan male runners with around 60 being part of my international team. This is a lot lower to previous years due to Covid.

The race takes place in a town called Masaka in rural Uganda which is around a 3.5 hour drive from the capital Kampala and is around 23km south of the equator. This is where we spent the week running up to the event. I feel I could write a book about the weeklong event, the extraordinary people I met and experiences I had but equally have no idea where to start to help people understand. The itinerary included daily 5km runs with Masaka running club, a group litter pick, organising a sports day for local children and the opportunity to visit numerous projects that the marathon supports, including a full day with the project you chose to support. The days were jam packed and filled with some pretty physical challenges including digging out the ground and laying a path at a plastic recycling project, painting buildings and some heavy duty gardening. The evenings included trips out to experience Ugandan culture or nights around the campfire. 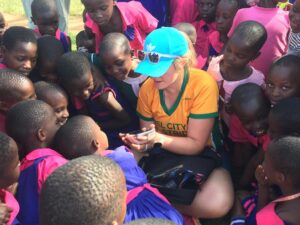 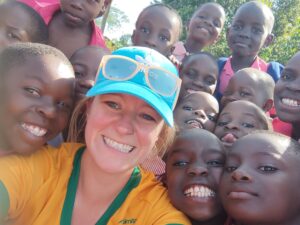 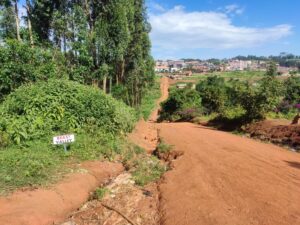 I chose to support a primary school called Bright Angels. The school is a boarding school with over 60 orphans. The aim is to raise enough money to get the very rural school a rainwater tank and a fresh water well. The children currently walk a round trip of 7km to fill 50 jerry cans daily, and this source isn’t guaranteed to be animal waste free. More information on the project: The 2022 Uganda Marathon Projects – An Adventure Like No Other!. I spent the day at the school, proudly sporting my Striders kit. We painted the kid’s pictures on the wall of a classroom, painted the outside of another classroom, played football and netball with them, and helped plant coffee plants to raise extra funds for the school. They treated us like royalty and even gave me the honour of planting a palm tree at the entrance to the school. The children obviously had had very little exposure to white people as they were absolutely mesmerised by us. They had so very little at the school, it was heart breaking but truly the most extraordinary experience and I’m so proud I could do a tiny something to help. Lots of Striders have already been so kind and donated, but if anyone else would like to make a small donation my JustGiving Page: www.justgiving.com/fundraising/rosie-smith44

A massive thank you to Strider Michael Ingham for his kind donation of trainers to the Masaka running club. These were sold cheaply at a shoe sale the day before the race to help support the club and ensure more runners had trainers. I still did see several people running the marathon in battered old crocs and flip-flops though. My race fees included the entry fee for 16 other Ugandan runners to participate free of charge.

Race morning arrived. I already had suffered from a pretty nasty case of sun/ heat exhaustion and had a very upset stomach. The race starts at 7am and on our way to the start line, the heavens opened for a good soaking of rain and I slipped on some tiles and badly bruised my coccyx. Not the best race prep but I took an extra dose of Imodium and was determined to get myself round. 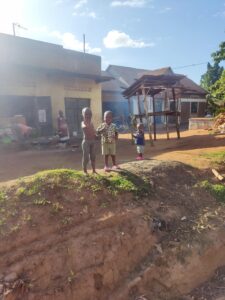 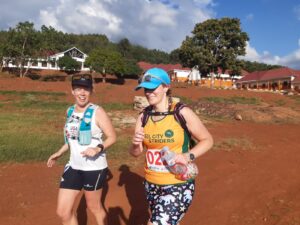 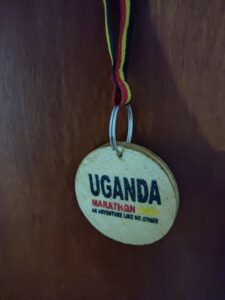 The route was nothing short of extraordinary. The terrain was very dusty red uneven paths, it went through 3 of the schools the marathon supported (including a school for the deaf). All the locals were out on the road the whole way cheering us all on. We ran past huge termite mounds, alongside huge horned cows on the road, through a eucalyptus forest, past a group of prisoners being marched at gunpoint and through some extraordinary fruit tree plantations. I made lots of stops to hand out lollies to some very cute local kids. Many of the kids ran stages alongside us. We were extremely well supported on the route with lots of water stations, medical teams and our very own support crew driving continual loops of the course checking on us individually and offering bananas, sun cream or extra water.  It wasn’t long until I was lapped by the front Kenyan marathoner who I was told completed the course in an impressive 2h38mins. I actually forgot to stop my watch so not sure on my finishing time but I think it was around 2h55mins for the half.

The international runners were a real mixed bag from very experienced and well-travelled ultra-runners to people who had never completed the marathon distance but through sheer determination managed to get themselves round. Think the last runners completed it in around 8 hours. There was no official cut off time. The race day was finished off with a medal ceremony and a huge party by the campfire for the international team.

I hope I’ve managed to convey what an awesome event the Uganda marathon is. Even without any additional fundraising (there is no minimum amount) the event is a huge boost for the town’s economy, and I would be over the moon to see more Striders considering the event.  The event bills itself as “an adventure like no other” and I can’t agree more.

One Strider Ran.  There are no official results.