Warwick half had been on my radar for a while. Why? Hailing from Coventry originally I have accommodation and a reliable food source nearby. I have also seen it pop up on real life Strava friend’s feeds from time to time and it always looked pretty tasty.

Warwick is a small town with an excellent castle and a racecourse, the latter of which plays host to the local half marathon. I was able to park s stone’s throw from the start/finish line – for free – and there was a good selection of toilets and food/coffee vendors.
I was looking for a half that had a similar character to the Yorkshire Marathon and Warwick fitted the bill perfectly.  Starting and finishing at the racecourse had a similar vibe to setting off from the University of York campus albeit on a smaller scale. Leaving the town within the first mile or so the majority of the course is on country lanes through villages and picturesque rural landscape. Supporters are found in small pockets rather than lining the entire course.
The Warwick half describes itself as undulating which translated into Sheffield speak means not that hilly. In case I was in any doubt a helpful cyclist hailed me at the bottom of an undulation;
“Is that Sheffield” nods at the gold and green
“Yep”
“Plenty of hills there”!
So that settled it. No elevation to worry about but plenty of ups and downs to keep me ticking over and avoid the dreaded dullness of a flat race.
If you are looking for a nice training half for the Yorkshire then I do recommend Warwick – but obviously it is too late for this year! There is the Leamington half in 22/6/22 which will be very similar terrain and was voted the second best half marathon of 2019 for whatever that is worth! 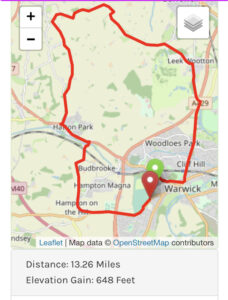