I first ran the White Peak Half in 2006. A friend and I ran it together. It was the fastest half marathon we had ever done, due to the fact that the route is downhill. Subsequently my friend became unwell.  However, in 2019 she was in remission and to celebrate her improved health we decided to relive our experience. Covid of course intervened and my friend relapsed before the race was rescheduled to May this year. So, I found myself alone, under-prepared and with lots of excuses (Covid, norovirus, sinus infection, life) as to why this time the run would not go so well.

The race is part of the White Peak Running Festival organized by the Matlock Athletic Club comprising the Ian Milne White Peak Full and Half Marathons and the ‘Down in a Shot’ 10K. The common feature is that you are bussed out to the race starts at points on the former High Peak Railway Line. This means an early start and lots of dithering about snacks and clothing.

Car parking at Cromford Wharf was extensive, number collection was fairly efficient, there were public toilets on site and the transfer buses were clearly marked. So, after a quick top up on snacks and coffee, it was time to get on the bus. The journey seemed to take forever, not helped by getting stuck behind a tractor which was stuck behind a bike. I became more and more daunted by how far we were travelling away from the finish and how long it would take me to run back.  We were then discharged from the bus and told to walk until we saw a marshal  It was quite a long walk. We found ourselves in Friden car park with a good number of porta loos. The start was a further walk to what appeared to be a particularly bleak spot especially as by this time it was really quite cold. We all put off putting our outer layers in the luggage drop van as late as we could.

Just before we were all called to the start who should arrive but fellow Strider, Clive Downing. We exchanged a few words about how unprepared we both were and Clive said that it would be a case of run/walk – which I didn’t believe for a second. And then we were off with Clive at the back. After the first mile we had to cross a major road. This was well marshalled but may have been difficult for any runners who were separated from the main cadre.  As we carried on along the trail, I became less focussed on the cold and began to appreciate how lovely the countryside was. The surface was good and the route slightly undulating except for the three significant downhill stretches. Walkers and bike riders were extremely accommodating. The route was self-explanatory and needed little marshalling but where marshals were needed, they were there. At the first water station (there were three a bit randomly placed) a woman said that she was really grateful to me as she had been using me as a pacer. This cheered me up and gave me a sense of responsibility to keep up a steady speed. However, at the start of the 10K race she was joined by a teenager, her nephew apparently who had unexpectedly turned up and joined her on the run. He was a very fast runner in the gangly, unstructured way that teenagers are.  Needless to say, my function as pacer had been usurped, leaving me well behind. She was however very magnanimous and thanked me again at the end of the race.

As we approached the last mile my lack of training really showed and I was very tempted to walk, but a Barnsley lad who looked to be in a far worse state than me shouted, ‘Come on Steel City’ which shamed me into making more effort. Then, about half a mile before the end Clive shot past me.  Try as I might I could not gain on him. How he managed to preserve so much energy for those last few hundred yards I will never know.

At the end of the race, we collected our White Peak mugs into which we could pour the water provided. We then picked up our goodies, a brown paper bag containing fresh fruit and a carton of orange juice. Presumably the environmentally friendly goody bags set off the carbon footprint of the buses!

Clive and I think that this most enjoyable race should be considered for inclusion in the 2023 Striders’ League – trail or road to be decided.

There was a third Strider taking part but we did not manage to spot him. It appears that there were no Striders in the marathon or 10K. The first finisher of the half marathon was Michael Perry of Kimberley and District Striders in 1.16.41. First lady was Kate Wright of Stratford upon Avon AC in 1.21.55. 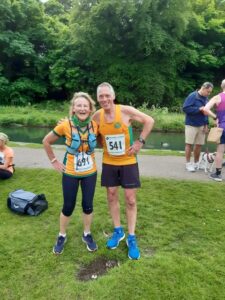 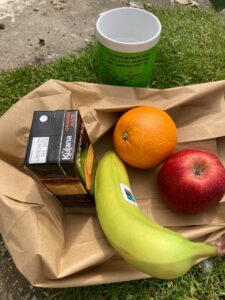