The World Masters’ Athletics Championships was scheduled for Toronto in 2020. Along with every other global fixture it was cancelled because of the pandemic and restrictions on movement. Tampere in Finland agreed to host the postponed games in 2022, significant for me in that it was closer to home and right at the start of my new age group. There wouldn’t be a better opportunity to compete with the best and make my mark on world athletics.

Tampere, pronounced ‘Tamperer’ is known as the ‘Manchester of Finland’ because of its textile industry on the banks of the Tammerkoski which flows between two lakes or Järvi. The glorious weather and large green spaces made it seem anything but the Manchester we flew out from, heading north east towards a country which sits uncomfortably close to an enormous border with Russia.

The Competition is primarily a stadium event but includes both a road 10k and half marathon and a cross country event. I entered the 10k road race and 6k cross country and for a laugh offered to be a reserve for any W70 track relays.

My first event was the 6K cross country race. I love cross country running, marked by rapid changes in elevation, surface and mud. This one was a flat 2k circuit on loose gravel. The spikes stayed in their bag as I skitted round in road shoes on a glorified parkrun.

Inevitably the race was delayed because of various technical issues so we were made to wait as the temperatures, nerves and tempers rose. It was important to stay focussed, time the nutrition and preparation well and be at my best at the gun. I knew my biggest problem was in setting off too fast so as we finally started I tucked in behind the leaders, Germany and Ireland intending to sit with them until I could produce a well timed push which no one could match. All good until you discover everyone else has the same plan. It meant the first lap was quite slow. Goettnauer, the German athlete pulled back and Eileen Kenny, Ireland, immensely experienced and skilled, dropped her pace too. I had either to pull back or take it on. I took it on. For the remaining two laps I had to try and lose the women in my age group to take the gold, and I very nearly did. with less than 200m to go the Finn appeared from somewhere behind, chased by Kenny and Goettnauer leaving me with nothing left to offer. I ran in fourth of thirteen W70’s in a personal pb time of 25.19 minutes. The compensation for an otherwise disappointing result was that my fellow GB athletes, Anne Dockery, 6th and Ros Tabor, 8th produced times good enough to convincingly win the team gold medal. 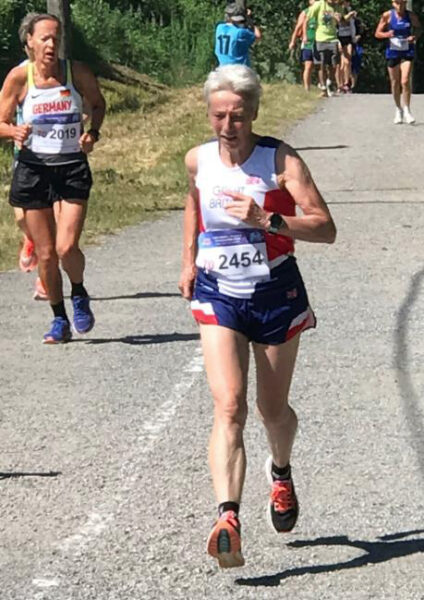 6K cross country race in the heat of the day 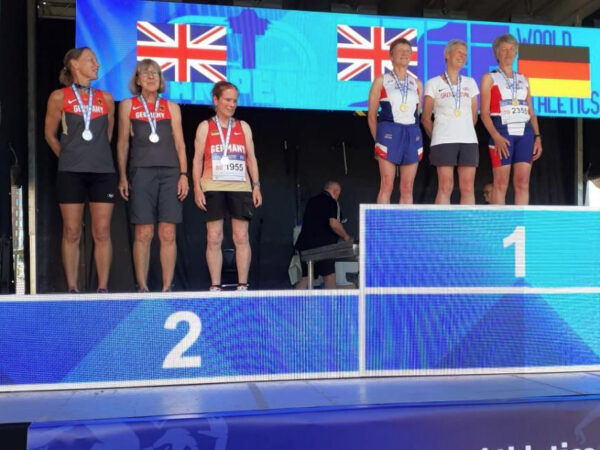 Hugely relieved that the first race was done, I spent much of the following days until my 10k road race in the stadium watching extraordinary athletes from around the world performing at the highest level, among them Mike Powell, M55, USA, world record holder, (8.95m) long jumper and Angela Copson, W75, GB, and Steve Peters, M65, GB who showed us what it is to be an elite in sport regardless of age.

Temperatures remained high throughout the competition so I was a little worried that my attempt at the 10k road race would amount to nothing. I had worked hard for this. All the training combined with local 10k races had helped me gain a better sense of pacing and build the necessary strength and endurance for the event. I did all my homework, checking out the route in advance including elevation gain and loss and left as little to chance as possible. Kenny, my main rival on the day warmed up nearby. She’s an amazing athlete and I knew I’d do well to stay with her if I wanted to medal.

Again the event was delayed, the route changed at the last minute, and the transport arrangements insufficient to get everyone to the start on time. Nerves jangled and searing heat but this is what I came to Finland for and I had to make it count. A man wandered over for a chat. his bib named him as Richard Askwith. I stuttered ‘Are you Richard ‘Feet in the Clouds’ Askwith?’ He was. He’s done the Bob Graham so is now concentrating on older athletes for another book. I got the obligatory selfie with him and carried on warming up. We, the women, finally set off after watching the men’s race, unnerved by how exhausted they seemed as they streamed over the line. One of them counselled a very steady start because of the heat. 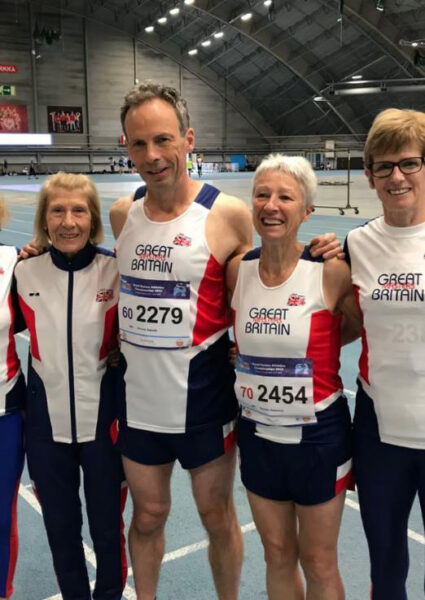 I set off next to Kenny. As we completed our first kilometer one of her teammates shouted that we were well out front in the age group and to ‘play off’ each other to keep it that way. Kenny, steady and strong, led the first 5k with me comfortably on her heels, I then took over expecting her to chase me down in the final stages of the race. I kept it steady, averaging 4.40k pace and slowly eased in front. With a kilometer to go Kenny was around 30m behind me. She had begun picking up the pace for her classic blitz finish so I dug in and called on all my reserves. I crossed the line in 47.17 minutes, first W70 with Kenny a mere 8 seconds behind. I’d done it. W70 World Champion. Those moments after accomplishing your goals are priceless. I walked around in a complete daze, oblivious to everyone, sweating profusely, breath rasping. It hurt but the pain was irrelevant. The best explanation is to visualise the winning team and the losing team after a cup final. New energy against total defeat. My warm down was pain free. I was up for doing it again. I hugged Kenny who had gifted me a one session master class in pacing. 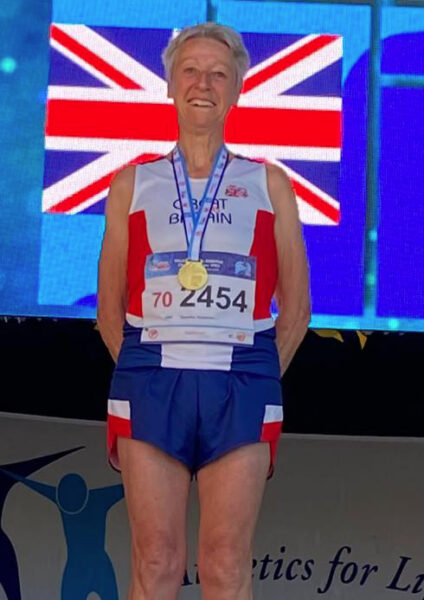 And so my job was done. I had achieved what I came to Finland to do and would be bringing home two gold medals, one team and one individual. I celebrated with a sociable Tampere Parkrun on Saturday morning and wandered off to the stadium in the afternoon to relax and enjoy watching track and field events, happily bumping into Sheffield’s Paul Fauset, M45 half marathon runner and GB British Masters 30K trail running champion. We were into the 4x100m relays. As I started on my very large lunchtime sandwich I got a call from the GB stadium manager. One of the W70 athletes had had to withdraw. It meant GB W70 couldn’t raise a team to compete. Was I willing to run leg 1 and hand the baton on to Northern Masters and World Champion heptathlete Caroline Marler? I have no track experience. I don’t do sprints, I don’t know the rules about lanes and handovers. Yes, of course I’ll run. Sweaty GB kit and number back on and road shoes ready. Within the hour I’d registered, taken my place, run a very average 100m and helped my team to a silver medal, Finland narrowly ahead, in a Masters’ World Championships. It really is the stuff of dreams and all over far too soon. 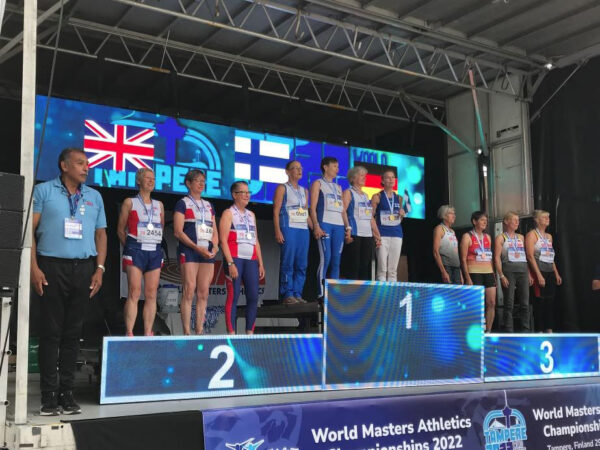 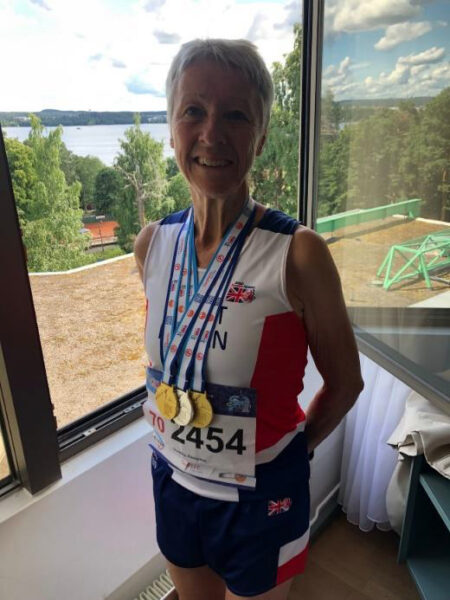 The journey home was uneventful, or so I thought. Buses, trams, trains and planes work very efficiently in Finland. I was back in Manchester (the real one) as expected and looking forward to a beer or celebratory glass of wine, except I had a bit of a headache and was suddenly very tired. A cautionary test the next morning confirmed that after two years successfully avoiding Covid I was positive.

As I type this I should be in Scarborough doing my leg of the Commonwealth Games Baton Relay. I have the fancy kit and all my instructions; the sun is shining and the little cherry to top my incredible experience in Finland is there, waiting for me. Instead, nursing a cough and a distinct lack of joie de vivre I’m grumpily pounding the keys and sighing, a lot. I’ll miss the Striders 10k race along the lovely Ladybower on Friday and if I’m really unlucky the 40th anniversary celebration next weekend.

I have an incredible coach in John Rothwell. A founder member of the Steel City Striders, he took me on as an aspiring athlete around four years ago. He has been the most inspirational colleague and mentor. John asked me what I wanted to achieve as an athlete. I didn’t know then so said I wanted to see whether and where I could take my running journey to. His belief in my ability, along with other athletes spurred me on to train effectively, rest well and compete with confidence and self belief. As the coach of a World Champion I know John is rightly proud of our shared experience. Thank you John.

My thanks goes also to the people who have supported my running journey, notably Stuart and Debbie at Accelerate who advise on kit and leave me in knots in regular strength and conditioning sessions and Sally Fawcett, physiotherapist, who helps me to iron out all the niggles. As ever my love and thanks to Kate Morris and the Smiley Paces running club who challenged me all those years ago to have a go at a 5k Race for Life.

The Masters is open to athletes aged 35 and above, and features track & field, road running and cross country events. As detailed above, lone Strider Dot competed in 3 races: the Cross Country (6km), the 10k Road Race and the 4 x 100m Relay. Results below. You’re an inspiration to your club Dot, fantastic running!

Full results for all individual categories can be found on the WMA2022 website.

Full results for all team categories can be found on the WMA2022 website.

Full results in all categories can be found on the WMA2022 website.

Full results of the W70 4×100 Relay can be found on the Tuloslista website. 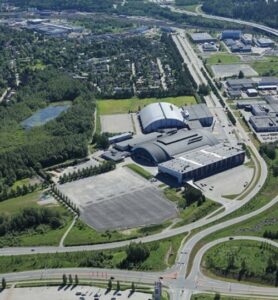