The Yorkshire Road Relays took place on the 16th April on the cycle track at St Thomas A Becket School in Wakefield and Striders had a men’s and women’s team competing.

The course was one for the speedsters at just 4 km (2.5 mi) over four laps of the track, although there was a tiny hill to be tackled on each lap to keep us on our toes.

In the women’s race it was a Striders face off as Steel City Striders were in a race long battle against Valley Striders. Gillian Allen was on the first leg and ran a strong 14:47, ending up in 6th place with an 11 second advantage over Valley.

On the second leg Yasmine Chaffer ran a 16:16 leg which was well paced considering she was running on her own for most of the leg, and put another 28 seconds into Valley. Claire Grisdale (who had stepped in at late notice) then put in a great effort on the third leg to run 16:27 and kept Steel City within reach of Valley. Caroline Brock took over for the final leg and steadily reeled in and overtook Valley to secure 6th place with the fastest Steel City leg of the day at 14:34. 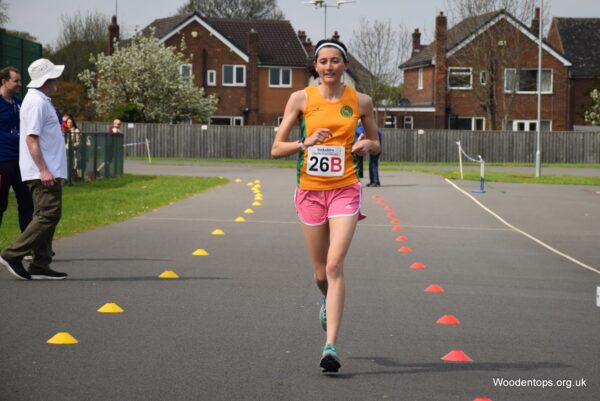 The total time over the 4 legs was 1:02:04 for Steel City Striders and 6th place overall.

Hallamshire Harriers took the overall win in 57:28 after moving into the lead on the second leg and never letting up until the finish. St Theresa’s held second throughout the race, and Rothwell took Bronze after overhauling Wakefield on the final leg. The fastest leg was run by Isabel Richardson of Holmfirth Harriers on the first leg with 13:46. 9 teams competed in total which did sometimes mean it was a lonely run for some of the runners, but did make it easy to follow the action up and down the field.

The men’s race was a bit more chaotic with 20 teams of 4 runners and each runner doing 4 laps. At times keeping track was a bit difficult, but it did make for exciting racing and constant action around the track. Rob Byers was on the first leg, fresh from his club record Manchester Marathon and ran a superb 12:27 leg, fastest Strider of the day and seventh place in a very competitive group.

Jordan Moat was up next (also fresh from a great time at Manchester!) and kept us in contention for a good placing with a 13:40 second leg.

I was on the third leg and with the positions & competition for places beginning to settle I set off with the Sheffield AC athlete in front of me. This turned out to be a bit of a pacing mistake as: a) he was a bit faster than me and b) they were an incomplete team who were going to finish after this leg. After a quick first mile I hung onto 12th place & a 13:53 leg, handing over to Richard Pearson for the final leg. On the last leg Wakefield’s ‘B’ team were our main competition, 20 seconds up the road from Richard. He set about reeling them in and by the final lap had made contact and moved ahead, but the Wakefield runner wasn’t to be dropped and managed a fast final kick to come in just ahead of Richard who ran a super-fast 13:03 leg and had closed a big gap to be in contention. 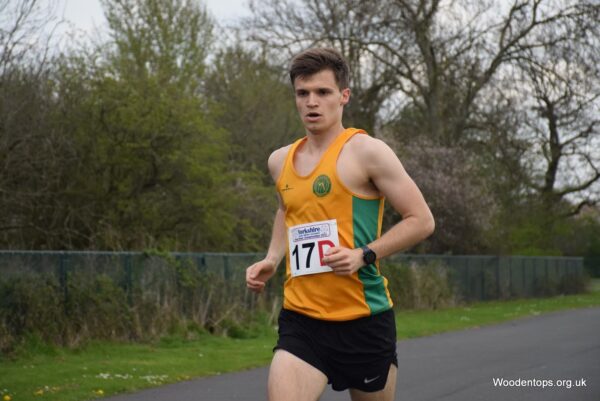 At the front in the men’s race it came down to the last lap of the last leg for the win. Wakefield’s ‘A’ team had ordered their runners from fastest to slowest and hoped to lead from gun to tape, while Doncaster had placed their two fastest runners at either end of the order. In the end Doncaster overhauled Wakefield at the end of the final leg and took the win by just 4 seconds in 48:41. Spenborough completed the podium in 3rd and had the fastest individual leg of the day with Joe Sagar running 11:26 on the second leg.

Overall it was a great day out and a fun event to do. Big thanks to Tim Holt for arranging the teams and entries from Striders, also to the officials on the day who had a busy day managing multiple junior races then all the senior timings and handovers. 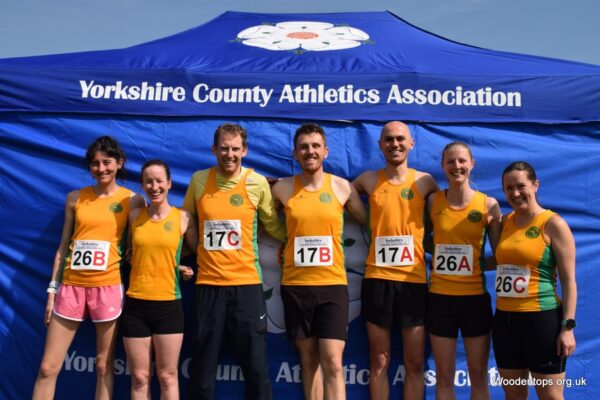