The Yorkshire Vets’ Cross Country Championships is open to members of YVAA-affiliated clubs from the region aged 35 and over. Prizes are on offer for individuals in five year age categories, and teams of various sizes in 10 year age categories. It roves around Yorkshire, but this year came to Sheffield, thanks to our very own Richard Pegg stepping up to organise.

This year there was a shorter 5k race for the older runners and a longer 10k race for the younger runners. We had a good Striders squad, including a number of runners who would run the Dronfield 10k the next day. They say that age brings wisdom. Back-to-back races sounds mad to me, but those going for the double (Carol Beattie, Kate Scott, Jacqui Herring, Stephen Schubeler, and Neil Schofield) pulled it off with style, so what do I know?

Our club has some history at this event. Our past winners include John Kerr (2004), Sheena Woodhead (2017), and Helen Eberlin (2016 & 2019), while Dave Ansell, David Palmer, Carol Beattie, Andrew Norton, Mandy Taylor, and others have all picked up medals over the years. So it was a good day to show the club colours and try to extend a tradition.

We’ve had mixed weather this cross country season, from the mudbath at Kiveton to gales at Pontefract, but Sheffield delivered glorious sunshine for the season finale. There was none of the “I’m sure I’ll be glad to have done this when it’s over but right now I’m cold and wet and questioning my life choices” you occasionally get while waiting to start; it was just a joy to be there, looking down on the city, ready to run.

Some cross country courses can be pretty tame. I’ve seen televised internationals around pan-flat fields where logs and/or hay bales have had to be deployed Dick Dastardly-style to make the running more interesting.

This was no such course. Richard had us running laps from the bottom of Norfolk Park to the top, with a challenging camber on the way back down. The long race had 250m of ascent over 9.5k, not far off the first half of the Sheffield Half Marathon, but run as 5 steep hill reps instead of one gradual climb. Even in mild temperatures and bright sunshine it was attritional, a proper test. No wonder the event was for experienced runners only; this was no course for a novice.

Just as the first race of the day began, an eagle-eyed marshal spotted that a dog had deposited a hazard in the middle of the course’s final bend. Rather than remove it, a quick decision was made to mark it with a circle of mini-flags so that runners could avoid it. The course was wide here, and it was well off the racing line, but this was a sensible precaution.

At some point, though, one runner must have decided to deviate from the racing line to take in the small ring of flags, and everyone else must have followed. From then on, for lap after lap, we had the absurd spectacle of hundreds of runners taking the corner wide to run around a dog poo.

You may not be able to polish a turd, but stick enough flags on it and people will go out of their way to pay it respect. Depending on your politics, you may see in this a metaphor for our times; I couldn’t possibly comment.

When the racing was done, as many as could comfortably fit (and perhaps a few more) squeezed into Norfolk Park’s community building for the prize-giving.

Dot Kesterton had joined the Striders roll of honour with an impressive F65 win. In a race where the top three finished within 25 seconds, Kate Scott had improved on her F55 3rd place last time by coming 2nd. And along with Carol Beattie (4th F65) they’d won the F55+ 3-to-count team prize. 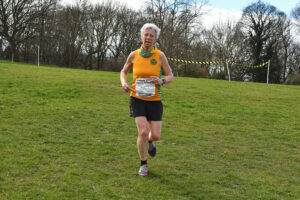 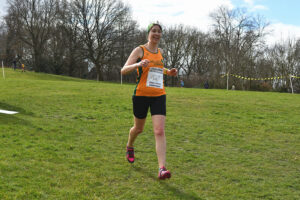 Our F45s showed very well too, with Sarah Moss (4th) and Jacqui Herring (7th) just a team-mate short of some medals for their efforts.

Beyond those headlines were another half a dozen or so Striders who all conquered the hill, repeatedly, and helped to make the day what it was, including several cross country debutants. Full results are on the YVAA website; Striders results are below. Thanks and well done to all 18 Striders who joined in.

Thanks also to Richard Pegg and all who volunteered. This was a hugely successful event that did the club and the city proud. That’s down to your hard work and generosity with your time. 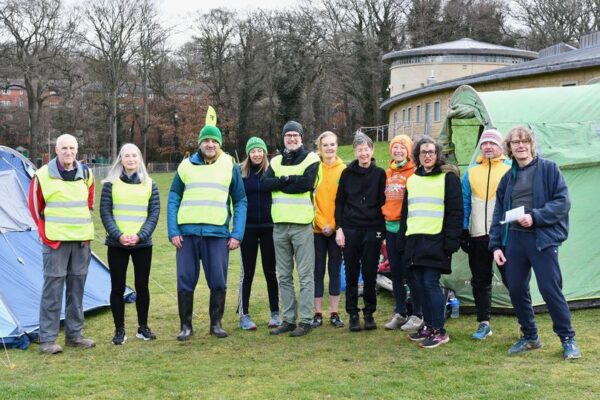 The next Yorkshire Vets’ championship is at the Bronte 5 in Haworth on Thursday June 9th. It would be great to see a mini-squad of Striders making the trip. At the time of writing, there are only 19 places left though, so don’t put off entering too long.