Two reports – first report on the Half Marathon by Lisi Briggs

I was lucky in the run up to the race: I got covid the day after the Sheffield half (which had been my first half-marathon to date), and managed to recover just in time for this race, two weeks later. Two meaningful races for me personally, Sheffield my new hometown, Zurich my former hometown. It was special for me to share and experience my love of running in my childhood home. Because it’s thanks to Sheffield that I fell in love with running in the first place: the strength you acquire from its hills, and discovering and falling in love with my new hometown due to exploring it by foot, guided and accompanied by the variety of wonderful souls that make up the Steel City Striders.

It was Zurich´s first ever half marathon (it used to only offer the Marathon and the 10k Cityrun) and it sold out quickly. There were some little new event issues, like not enough toilets (or perhaps that is just standard), and there were no distance markers for the half, rather, as the half route was shared with the marathon route, there were the marathon distance markers which got quite confusing towards the end. The half and the marathon started at the same time but at the opposite ends of the route. The marathon runners started in the city and ran along the lake and then back, whereas we half runners started along the lake and finished in the city. The half runners benefited from the plentiful marathon nutrition and isotonic drink stations, and I really enjoyed being able to watch the marathon runners pass by. I think watching them and running with them, really spurned me on and inspired me. But did they enjoy seeing the half runners already on their way back so to speak, much closer to the finish line? I wonder if that would have bothered some, psychologically. A cool feature of this format for me personally was, that I happened to reach the finish line a few minutes before Tadesse Abraham, the marathon winner, so my finish was accompanied by lots of cheer! I don’t know how it was for him though, to share his moment of glory with lots of amateurs runners!

So a bit about my race experience. All runners benefited from free public transport tickets, and with Zurich´s plentiful and truly always on time city train connections, getting to the start was confortable and easy. We were given clothes bags which were transported via boat to the finish line. I managed to have a pre-race wee, but I should have timed that better, as half an hour later I had to go again but by that time the queues were too long and it was too late. The toilet shortage made good pre-start conversation with fellow runners to settle the nerves. I managed to find an empty loo at around 5k and to sprint back to the 2:15 pacers whom I had settled with. Checking with my watch, I soon felt that they were faster than needed to be, so let them go at around 8k, as I didn’t want to run out of energy, and felt comfortable with my 6.15/6.20 pace as intended, and which still kept me on track for 2.15, which was my aim. Now I wonder if I was too comfortable? Had I held on to the pacers perhaps I would have finished a few minutes faster? Or did I make the right choice as I felt comfortable right until the end and that’s a good thing? Racing questions!

I enjoyed running past the villages I know so well from growing up, and the weather was perfect, cold but sunny, no wind. It really was lovely running, good music, good flow. The very BEST thing happened around 13k though – one of the marathoners passing by in the opposite direction waved and shouted to me, and out of the corner of my eye I noticed her green and gold shirt… I turned around and shouted back, recognising Charlotte Civico! So I hadn’t been the only Strider present after all! This little moment gave me a huge boost… another person from my new hometown, here in Zurich, and recognizing each other – I flew on for the next km. However, km 15 and 16 followed and they were my slowest, I think I must have just gotten a bit tired. Or is the „only a parkrun to go“ psychology counterproductive, as you might not fancy a parkrun right now? I also hadn’t taken have any of my gels because of the isotonic sports drinks they offered at the water stations, perhaps that was a mistake, but who knows. When I started to see the city on the horizon however, and then turn and cross the bridge over the Limmat river to enter the iconic Bahnhofstraße, I knew there was only one more little loop to go, and I started to feel a sense of accomplishment that sped me up a bit. The urban scenery and good crowd support towards the end helped too, and I managed to catch the 2:15 pacers (well they actually substantially slowed down and ushered people in, which confirmed that they really did pace too fast earlier on). I crossed the finish line at 2:14:26 which beat my first half marathon time at Sheffield two weeks ago by 2 minutes. In a happy daze, eating an ice cream and wearing the nice quality finisher T-Shirt and medal bling, I walked back along the race route towards the train station. I cheered on the runners, and marvelled at strength the marathon runners displayed. They were just coming in at sub 4 hours and I gathered that Charlotte might not be far away – and there she was! I ran alongside her a bit and (hopefully) made her believe that she hadn’t had much further to go. Mega effort Charlotte, a huge well done!! – 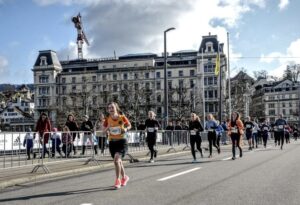 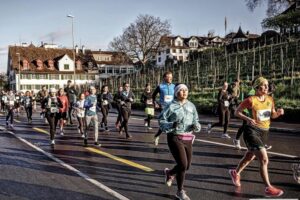 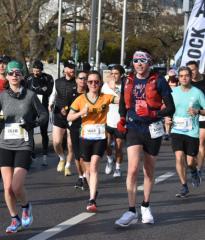