Cross-country is not the most stylish of running disciplines, as anyone who took part at school will know only too well. What cross-country lacks in grace, however, it most certainly makes up for in fun; and cross-country has the potential to contribute to your strength, stamina and speed as runner in significant ways. This short introduction to cross-country offers a guide to getting the most out of your cross-country season, both during the races and afterwards as part of your longer term training goals.

But for those who managed to skip cross-country at school, who peeled off the cross-country course for extended fag breaks, or found canny shortcuts through neighbouring back gardens, it might be a good idea to go over some of the basics first. 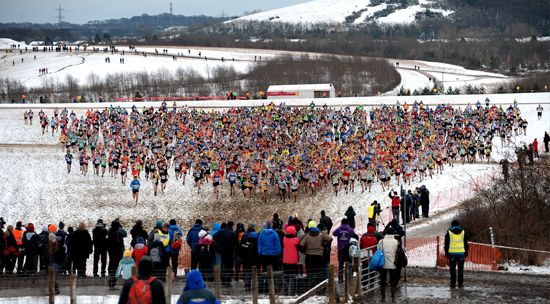 When: cross-country takes place during the autumn and winter months (usually from October to February).

Who: only members of UKA affiliated running clubs are permitted to take part in cross-country (i.e. pay your subs or you’re not getting in).

Where: at venues across South Yorkshire as part of the South Yorkshire Country Athletics Association league, and at a venue outside South Yorkshire for the National Relays (usually Mansfield). Keep your eyes peeled for the venues for the both the Northern and National Cross Country Championships (in 2015, the former took place in Pontefract, the latter at Parliament Hill in London).

How: entry invariably has to be made via the club, so look out for details on the club website or Facebook page on how to sign-up.

With the basics covered, the rest of this guide works through the principles of cross-country running to give you a picture of what you can expect on the day and how you might go about preparing for the races in terms of kit and training.

Cross-country races regularly take place some of the country’s grandest parks and parkland – Wollaton Park, Parliament Hill, Cannon Hall – though the paths these races take through these landscapes are often far from picturesque.

Lucky for we Sheffield folk, cross-country courses have always been, and always will be, undulating. Since courses usually comprise multiple laps (of which more below), hills are also likely to be tackled more than once during the race.

Being off-road, too, cross-country courses traverse uneven ground. And since the cross-country season takes place during the autumn and winter, conditions underfoot can either be rock hard from frost or muddy and slippery from torrential rain.  Courses might also include small obstacles like stream crossings, or stiles or logs, which you’ll be required to leap or clamber over in what ever ungainly style you see fit.

Striders club vests are mandatory and race organisers are very strict on this. Striders training tops will not be allowed – you have been warned. In the old-school spirit of cross-country as a test of hardiness and endurance most runners brave the elements in just a vest and shorts, though undergarments and tights are permitted.

Due to the uneven terrain, a suitable pair of shoes is key.  Cross-country spikes are an excellent choice, providing the course does not encompass large sections of stony trail or track. Nowadays, spikes can be purchased online at a fraction of the cost of the average pair of road shoes. Trail shoes and fell shoes are also a good choice. In general, just choose which shoe you’re most confident will keep you upright when tackling muddy banks or slippery corners at speed.

Warm and dry clothes are absolute essentials at cross-country meets. Lots of thin layers are generally better than one big jumper or jacket. You can strip these off when warming up, then stick them back on when you’ve finished racing. Don’t underestimate how cold you’ll get, especially after the race when sweat has little chance to evaporate in the chilly weather. If in doubt, pack more not less.

Cross-country is just as much about team spirit as it is about individual competition. There’s a great sense of club camaraderie which is often unseen at the big name road races.

Each club arrives and pitches a tent, and then up go the club banners. The tent is used for changing and for storing bags during the race; and the banner fosters a real sense of Striders pride. It’s also a useful way of navigating back to base camp after you’ve run round in muddy circles a few times! 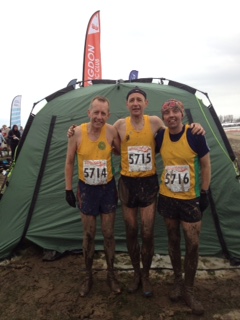 When you arrive, the designated Striders cross-country secretary for the day will be on hand to greet runners and dish out numbers. He or she will also go over a course profile with any runners new to the venue.

It may seem a little old-fashioned but in cross-country men and women race separately and over different distances. Men might do 10km, whereas women may only do 6km.  The races follow the same course, with men often covering an extra lap (eg. men might run three laps; women only two). Vet60 men often run with the women too and cover the same distance. At some meets, the men go first and at others, the women will go first. Either way, there’s plenty of opportunities to cheer your fellow Striders on either before or after your race.

As with all races, it’s important to both warm-up and warm-down. Aim for a steady one mile run followed by three or four strides (approx.100m bursts at speed to lengthen the stride and increase your heart rate). After the race, a mile warm-down followed by some stretches will assuage muscle stiffness the following day too. Experienced runners use their warm-up to have a good look at the course. As the race is over multiple laps, this is quite feasible. It’s also a good chance to check the location of the finish line.

How to Train for Cross-Country racing

Head position: Try not to look at the ground immediately below your feet. Instead look up and ahead. This will open the lungs and mean that you can keep a weather eye on the competition ahead.

Body angle: Run tall but not tense. Relax your shoulders and let your arms naturally swing forwards and backwards. Try not to let your arms cross your chest; this will make sure all your energy is dedicated to propelling you forward, not sideways!

Up the hills: When running uphill, lean forwards into the hill with your whole body, not just from your hips. Shorten your stride, drive more with your knees. Pump your arms harder and your legs will follow. An old runners adage is “run over the hill” which means continuing to push once you reach the top of the hill. This is a great place to catch the athlete ahead of you who is likely to be easing off.

Down the hills: When running downhill, again lead forwards with your entire body, keeping the body angle perpendicular to the ground. Leaning back will only encourage heel striking which is like slamming on the brakes with every stride. This isn’t a chance to kick back; precious places have been lost through tardy descents!

Stride length: When running on the longer stretches, try not to over-stride. Reaching for strides will slow you down with the heel again likely to hit the ground first. Shorter strides maintain speed and will allow for quick responses to the changing conditions underfoot.

Breathing: Breathe deeply; breathe regularly; and inhale and exhale through the nose and mouth. It won’t be summer so little there’s chance of you swallowing any flies! Oh and don’t worry, everyone else will be covered in snot too!

Relaxation: Poor running form is often caused by tension, either through races nerves or fatigue. A great way to prevent this is to practice your tension-aversion techniques. In training think about relaxing your jaw to avoid clenching your teeth. Let your arms and hands swing forwards and backwards, and breathe deeply. It might be a good idea to try this during your speed sessions, at the end of a tempo run or at track when your body is at its most weary.

Overall fitness: Improving your overall running fitness is the best way to improve running form. There’s not space here to talk at length about the principles of training but as a rule the four primary types of training guaranteed to help you run well on the day are:

There’s a club session dedicated to each of these components with a range of groups to suit runners of all abilities.

One of the best ways to run a race is to pace well. American high school coach Joe Newton, and good family friend of the Coes, advises to start cautiously, to go strong in the middle and to hard at the end. Even in races with an uphill start, races often start at such breakneck speed that runners slow down significantly midrace. Pacing well will help to maintain speed throughout the race, and will leave you with enough energy to shift gears in the final stretch if needs be, and to end the race with a finishing kick.

It’s important to remember that these races are comprised entirely of club athletes. The standard at the sharp end will be very good so don’t get fazed if you don’t finish as high up in the field as you might in a public road race.

The South Yorkshire Country Athletics Association is organised the South Yorkshire Cross Country league which comprises four races at four different venues. These races are held each year from October to December. One of these races will be selected as the venue for the annual Striders Cross-Country Championship race (keep an eye on the club website and Facebook page for details).

It’s also important to remember that the organisers work out the team scores by totting up runners’ positions NOT times. So when racing, you need to think less about your time and more about getting the best position you can (which is where that finishing kick comes in handy!).

Alternatively, we have our own Cross Country page where we post up the fixtures for the current year when known.

What’s in it for me?

Cross-country takes grit and determination, and a good pair of lungs. It demands a willingness to endure the mud, rain and sometimes the snow in just a vest and pair of shorts. Cross-country racing asks that you forget PBs and look beyond the ‘current pace’ reading being alarmingly displayed on the screen of your GPS watch. Oh, and forget free goodie bags and tech t-shirts too!

This being said, cross-country races can be some of the most rewarding races of all. If integrated into your autumn and winter training schedules, you’ll emerge from the cross-country season mentally and physically callused but with new found fitness and endurance. If you can tackle the long hills of Penistone Showground, and the steep muddy banks at Lightwater Valley, you’ll make light work of spring and summer road racing.

Little wonder cross-country has been the bread-and-butter for some of the biggest names in long distance running – from Mo Farah to Paula Radcliffe, Emil Zatopek to the Brownlee brothers – all of whom have used the cross-country season not only to win races, but also to prepare for major track and road racing championships during the warmer months. In fact, one of the highlights of the County, Northern and National Championships is that you get to compete in the same race as the elites so you too may have the pleasure of being lapped by the Brownlee boys! But you don’t have to be top of the game to reap the benefits of cross-country racing. Though competitive, races are genuinely open and welcome to runners of all abilities. Cross-country racing is about discipline, effort and skill but traditionally it’s always been about teamwork too. With the support and encouragement of your fellow Striders on race day, you’re guaranteed get the most out of your hard work, whether that’s contributing to the league rankings or simply trying out something new. 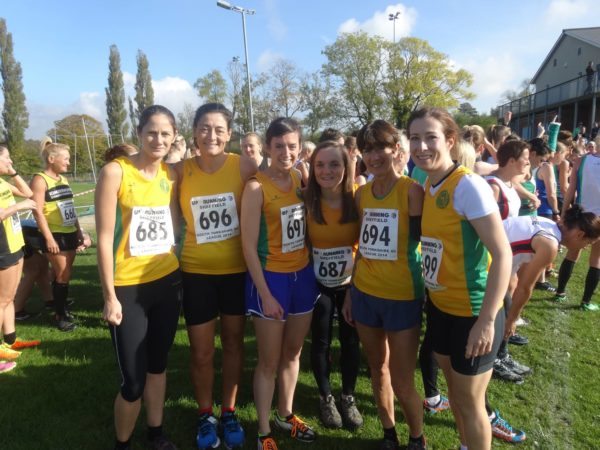