Out of Africa – The Long Run by Peter Brown

This article was originally intended for publication in the late lamented Easy Strider together with a similar piece on VO2 Max. The intention now is to use these with other contributions to build a suite of pieces for those new or not so new to Striders to plug into if required. It is very much a personal view and you may well disagree which is excellent if your own running philosophy is bringing the desired results.

Out of Africa. The earliest species of human, Homo erectus, evolved on the plains of Africa with specific adaptations for long distance running. These included changes in skeletal and muscular structure and probably improved sweating mechanisms which may be one of the ways in which humans came to lose their body hair. We may knock ourselves when compared to the animal world but we are good at running with adaptations for both speed and endurance (Leiberman et al, 2006). Simply put, the human race was designed to run and we all have latent abilities which can be unlocked with the correct training. Consider the times that average club athletes were running twenty to thirty years ago against those can win races today. People haven’t lost their ability to run during this short period, they have more likely lost the desire to train hard.

There are masses of books and articles available relating to running and athletics. People must buy and presumably read them given their number although one wonders how many actually put into action what they have read given the parlous state of road running at the moment. Nevertheless, all of these scribblings and schedules will have one thing in common if they’re any good – the long run. So, why the long run?.

First of all, because you enjoy it. What! Do something because you actually enjoy it? Why yes, because if you don’t enjoy your long run, unless you’re a sprinter, you’re in the wrong sport. It forms the base of all that we do. It’s also a chance to chat and socialise (more about pace below) or if on your own, to think and practice mental arithmetic. It’s the opportunity to get away into the country on Sunday morning or that driver to get you out on a dark and dismal December night.

What are the benefits of the long run? Apart from holistic stuff above, in simple terms, it enhances running economy, brings endurance and can improve VO2 max – the amount of oxygen that the heart/lung machine can deliver to be used by the muscles. The long run is not just for marathoners for if the target is 10k then a weekly 12/15 miler still has its place

Copying from a book:

These runs improve the ability to use fat as a fuel source and enhance all the following physiological adaptations:

The effect of all this is that whilst being able to store more fuel (glycogen) you also become better at utilising fats which is what is needed after all of the glycogen has run out.

How long is a long run? This very much depends on which book you read and your race targets. Glycogen stores as mentioned above tend to run out after 90/120 minutes of running. Note that it’s time not distance that is important here so if your longest run of the week is on Monday at Heeley it probably isn’t long enough. If you’re training for a marathon then obviously (!) the long run has to be longer. Nerurkar (2000) refers to a common rule of thumb that the five longest training runs in the immediate build up to a marathon race should total 100 miles. Along with Pfitzinger and Douglas (2001) running over distance isn’t recommended for the marathon as it leaves the athlete too tired to complete their subsequent training properly. Elite athletes may well run over distance as they’re so much quicker than mere mortals like us and can lounge around afterwards recovering; Pfitzinger recommends no longer than 23 miles for marathoners. 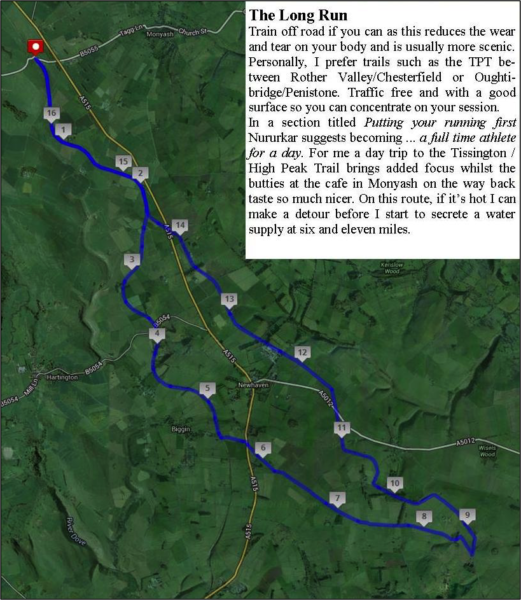 How fast should a long run be? Again, objectives are relevant. There isn’t space to go into all of the terminology but, according to Pfitzinger, the long run should be at 73-83% of max heart rate or 10% to 20% slower than your goal marathon pace; conversation pace in simple terms although there’s not usually much talking going on after 20 miles or so. (This blog Kravitz, 2013 handles the science well if you want to know about Lactate Threshold, Krebs Cycle etc). Running faster starts to challenge lactate threshold which should be tackled independently in more specific sessions. Having said this, especially for half marathon and above, there is a role for using the long run to rehearse running at race pace. Pfitzinger likes negative splits, running the second half faster than the first, and also suggests a fast finish over the final miles which can conjure up oodles of confidence for race day. Spedding (2009) introduced surges into his long run but he’s talking about racing, something that we rarely do in the true sense of the word although having the ability to ‘close the gap’ can be useful.

Take care however as, with over distance training discussed above, completing the long run too quickly can leave the athlete over-tired and unable to complete other training tasks properly during the following week. One man’s meat is another man’s poison – beware of joining a group that’s too quick for you as this will soon turn into your weekly race rather than a training session. When training from Heeley on Monday, if this is intended as a simple filler session, consider dropping down a group to avoid getting caught up in any unwanted antics.

Drawing on experience, having run the brutal Spen 20 in 2 hours 04 minutes, a 2:40 marathon might have been expected but only 2:53 was achieved at London a few weeks later. In retrospect running hard like that knocked back training for well over a week whilst it was possibly too close to the main target itself – an example of racing getting in the way of training. Therefore, when undertaking a major project such as a marathon, choose races carefully. Personally, there is a question against the ethos of the Long Distance Strider as this encourages quantity instead of quality. Race day should be special; perhaps it all depends on what we want out of our sport

Variety is the spice of life. Vary the length, duration and venue of sessions. We all have favourites but if you always run the same routes then it’s so easy to become stale whilst you may also become a slave to the stopwatch. Plan a day trip to a new route so that you look forward to your long run rather than loathe it. The way that some Striders use Facebook to organise themselves is excellent.

Whilst experienced athletes may be able to handle high volumes, it takes time to build up especially if from a ‘non-sporting’ background. Don’t increase mileage week after week, level off occasionally so that the body adapts to the higher volume, then increase mileage again and so on for increasing mileage suddenly may well lead to injury. If you can live without your endorphin fix, lay off the speed-work a little during periods when mileage is being increased.

It does what it says on the tin. For those new to running or undertrained this sort of session brings most improvement however a big problem with the long run is that eventually you will run into the buffers. If you only ever train at the same, easy, pace, whilst you may be able to run further you won’t get much faster. If you want to improve your 10k or half marathon times you will need to do some speedwork; the long run can only be seen as one component of your training strategy.

There are a number of core sessions which will stand you in good stead: long reps/hills, quality VO2 Max at the track and a long run. Throwing in tempo (a longer sustained run) or racing, filling in the rest of the week is relatively straightforward. If you use the gym or like to swim/bike then use this as your rest day. George Gandy will tell you that whilst cross-training has benefits you can’t afford to lose valuable miles doing something that doesn’t have a direct impact on performance. With all this work, recovery is vital, especially for us older ones. As discussed above, it is important to stay fresh enough to complete assignments at the required intensity which means that you don’t have to run flat out or to the ends of the earth every time you go out.

If you want try any of this faster stuff then Colin Hardy (Millhouses Tuesday Night), Dave Palmer (Chaucer) or Peter Brown (Woodbourn Thursday Track Night) will oblige or you might try a regular Parkrun on Saturday if preferred. Whatever you choose to do, consistency is the key – there’s little point turning up only once in a blue moon.

Gandy, G – in one of my old Athletics Weekly magazines up in the loft somewhere.

I know some of these references are a bit old, but so am I.