Landscape archaeologist W.G.Hoskins could have used the term Ludditism when he recounts the development of Stamford. The Cecil’s of Burghley house were backward landlords and wary of development. When the railway north from London was being built they were so afraid of losing income from their numerous coaching inns on this strategic watering hole on the Great North Road that they refused to allow the railway to cross their land. The town stagnated and its population actually fell whilst nearby Peterborough prospered.The railway did eventually arrive but by then Stamford had missed the boat. We’re lucky though as Stamford has remained unchanged and is the chocolate box that we now experience. Middlemarch and the 2005 version of Pride and Prejudice were filmed here, and the town is well worth a visit. Numerous inns also remain.

The route of the Stamford 30k also avoids the town, heading north, undulating its way into rural Rutland and Lincolnshire and back. Tough.

Sian Elizabeth reports how the weather was wild and windy with some snow and it was cold all the way round despite the sun which did make a brief appearance. Stating that this was really just a training run, Sian was still disappointed with her 30k pb reflecting that she would have liked to have gone faster considering marathon ambitions in the spring. At least the t-shirts weren’t as garish as last year so there was something good to say about the day.

First lady was Rachael Wood of Blackburn Harriers in 2:04:09 whilst Aaron Scott, lately of Lincoln Wellington, crossed the line first for the fifth year running in 1:40:48. Perhaps Stamford Striders need to increase their bounty for somebody to break the course record and attract some competition. 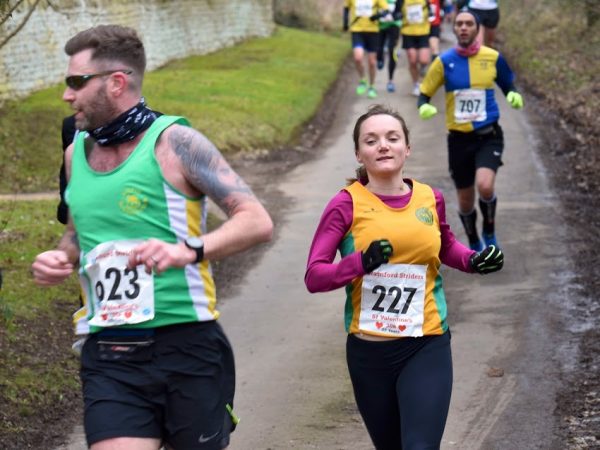 Sian wrapped up nice and warm as she descends one of the early hills.

If you want to run this race in 2019 get in early as it sold out three months beforehand. Entry limit is 750 and 609 finished so that’s nearly 20% of the entrants didn’t fancy the February weather.