While the high winds of Storm Callum had abated, I awoke on Sunday to a typically Mancunian morning: cold, grey, relentlessly wet. Still, not downhearted, I had the prospect of a fast and flat Half Marathon ahead of me, and I was excited by the prospect of PB chasing with 14,000+ runners.

I was staying in nearby Stockport, with a mate of mine. The night before we’d worked out over a couple of pints that it should take us 30 minutes to get to Old Trafford, and that if we left at 7:30 I’d have plenty of time to drop my bag off, get to the toilet, and make my way to my start area for 9. How wrong we were! At 8:45 we were still in traffic, so I panicked, got out of the car, and made a run for it.

This was not an ideal warm up, and as I got to where I thought the bag drop was located, a steward sent me off in another direction — rather unhelpfully, it transpired, he’d pointed me towards the start. I then encountered another steward who had no idea where the bag drop was, until finally, third time lucky, I was pointed in the right direction by an altogether more helpful chap who also informed me that the race had been delayed by 10 minutes. Emboldened, I managed to dump my stuff, have a quick loo stop, and speed through the empty streets to the start line.

I eventually started the race at 9:28am, just behind the 2:10 pacer. I was angry. Angry at myself for an uncharacteristically relaxed approach to the pre-race routine, and angry with the conflicting, unhelpful ‘guidance’ I’d received from the event staff. But, as John Lydon sang, ‘anger is an energy’, and I set about trying to make the best of a bad situation.

I had an idea of the splits I’d need for a PB so immediately sought to establish a rhythm. Impossible — the field was congested, with my fellow runners understandably establishing their own pace and not taking kindly to a red-faced, green and gold vested latecomer weaving his way through their personal space. I was, however, able to find some consistency by running on the pavements in areas where spectators were thin, going ‘off road’ and on to grass verges, and, rather precariously, running into the traffic on the side of the road that wasn’t closed. This made for a strange race experience. Normally, my strategy is to start with faster runners and hang on, but here I was constantly in overtaking mode and, because I was so preoccupied with finding parts of the course where I’d have the space to keep my pace up, I found that I stopped thinking about the 13.1 miles, and instead broke the race down into manageable chunks. Before I knew it, there was just a parkrun left to go, and one of the redeeming elements of this otherwise drab route through Greater Manchester is that the last mile is pretty much a long straight stretch of road, so I was able to step it up a gear. It was at this point that I spoted a fellow Strider, Arif Ali, on his way to a PB, and then received some words of encouragement from another club mate, Adam Newell, putting in a great performance in support of The Alzheimer’s Society. Finally, just over the finish line, I bumped into an exhausted Tom Brooks who had really left nothing on the course in pursuit of a heroic PB – respect, Tom! At that point, I looked at my watch to find that I’d got my own PB. Maybe starting at the back is the way forward. 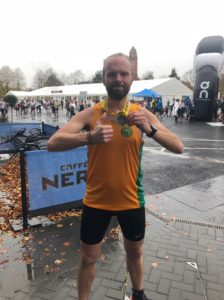