This is a long report. Thinking about things to put I it was part of what got me round the course.

Back in February, a friend sent me a link to a story about the Midnight Sun Marathon in a “let’s do this” way. Neither of  us had done a marathon before, and we figured we might not do it twice, so why not make it an interesting one? We duly signed up and started spending our Saturday mornings ploughing round the Derwent reservoirs with a view to running the race together (we’re fairly evenly matched for pace). Then the unthinkable happened and my pal ended up with a stress fracture. Accommodation booked and flights paid for, there was no way we were missing the trip even if only one of us was running.

Tromsø is the third-biggest city North of the Arctic Circle, and at this time of the year the sun really doesn’t go down. It’s absolutely beautiful, set on an island surrounded by mountains, and the people are very welcoming. There are also three good craft breweries, though don’t plan on getting drunk – it’s about a tenner for a half! (Everything is very expensive in Norway.) The reindeer sausage is also great, though we resisted ordering whale or seal, both of which are on several menus. The marathon is a real community event, the climax of a day of races: half marathon, 10k, 4.2k, 10k rollerblades and the extremely charming kids’ race featuring some joyously wayward toddlers in fancy dress.

The marathon begins at 8.30pm and the course is effectively two out-and-back half marathons, one on the mainland and one on the island itself. The first half is more picturesque and has more spectators, keeping up a constant chant of “hei-ya”. The second half is shared with the half marathon race, which starts two hours after the marathon. That came in quite handy later on. The race profile looks super flat, but there’s a fair amount of small ups and downs. The race starts in town, then heads up and over the forbidding bridge to the mainland, which thankfully isn’t as bad as it looks. Then it’s along the coast road for about 8k before heading back to town. The second half is bleaker but still beautiful, following the island coast round as far as the airport, with a few inclines and exposed sections, before turning back on itself towards town. The last couple of kilometres are pretty much dead straight, into town and along the main drag where the Saturday night drinkers provide plenty of support, before a slight uphill finish near the town hall.

That’s the description. Here’s how it went (better than expected). An hour before the race I was bricking it. The weather forecast was looking worse by the minute, I had no running partner and the race was starting at the kind of time I’m normally thinking about settling down with a cup of camomile tea. The crowd at the street settled my nerves a bit, but I was still too nervous to remember to sign up the two Sheffield lads I met as Striders. We were soon away and my legs felt good. I’d been aiming for sub 4.15 but I was running sub 3.50 pace. We ran through a scenic residential neighbourhood with a random rusting anti-aircraft gun and the rain was nowhere to be seen. At 11k in and just under an hour, I made the mistake of not slowing down. By 14k, with no sign of the promised rain I was getting hot and had to remove the Striders vest was wearing under my Weston Park shirt. Tied to my backpack it made a good flag for the rest of the race. By 18k various bits of my body really wanted me to know they’d been in service longer than a Northern Rail train, and getting back across the bridge was a mare. Still, being back in town with some crowd encouragement, a falling temperature and finally a bit of rain perked me up again, and at two hours I’d done 22k.

The first half marathon runners started to stream past us at this point, and I think having them to pace off got me through the next 8k or so, along with a gel, a Snickers, some Haribo and some bits of banana (handily provided at the frequent water stands) to stave off some wobbling at 26k. By the turn at the airport I was losing form though, and slowing down: 32k at three hours. On top of that, the Frankie Howerd eider ducks I’d been hoping to see were hiding somewhere. I couldn’t blame them, there was a proper headwind for most of the next 5k that took whatever bounce was left in my legs and there were an awful lot of clouds between me and the midnight sun. From then on it was just head down and plough. I picked up some speed when we hit a downhill on the outskirts of town but by 1k to go I was just counting 20-breaths-is-100-strides-is-100m over and over. I sort of noticed the crowds in town, and then finally the line was in sight, where I managed to register my friend was cheering for me and then it was done at last.

I’ve definitely got a lot to learn about marathon running (how on Earth do people do it in the warm?), but I think my “only ever doing one” resolution might have been left behind somewhere on the Norwegian shoreline. Besides, I owe my pal for being so supportive of me.

Unfortunately there is no photo of Matt in the official race photos, but hopefully this gives an idea of the atmosphere! 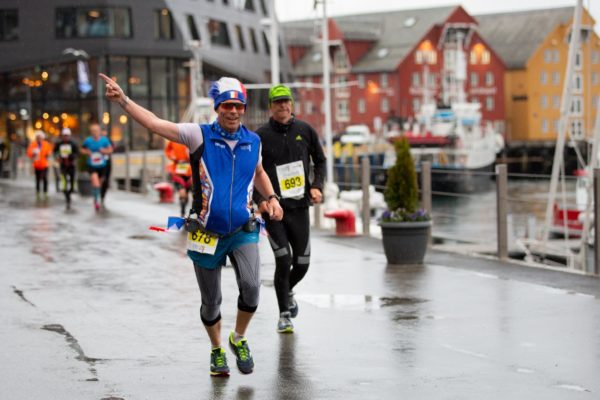