Event 72 of the #Nasser94 brought the 4th and final Middle Distance Triathlon of the series.

Sundowner Triathlon was 90 minutes in York with 1.30pm start, meaning no 5am alarm!

Swim – 3 laps of Allerthorpe Lake – Swim up, across, back, across, up, down, out the lake, back in the lake and repeat twice more…oh and it’s shallow in places. With my head suitably confused I just did what I always do in a race, it set off at full speed and see how long I can last. This time was a little different, I found myself out in front after 25m. Confidence turned to doubt so I looked back to see if I had missed something. Turns out everyone was still running as the lake was really shallow at the start, something I would’ve learnt if I listened to the race briefing. Ah well on I went, slowly making my way to the middle of the field. Swim, look, push, move, punch and kick, the sort of things they don’t teach you at Ponds Forge. It was a battle as everyone navigated the maze of orange bouys out on the lake. Half hour later I gladly got out the water and made my way into transition.

Bike – 2 x 28 mile laps – Nice and flat which is great if the majority of your training is done on the flats…..but we live in Sheffield. So after 1 lap of giving it my all I began to fatigue and I was over taken more often than my ego would like. Not much to report on the bike, just glad it didn’t last much longer than 3 hours.

Run – 3 x 4 and a bit mile laps – Deciding to take the gamble, I wore new running trainers as my last pair were well past their sell by date. In fact I’m sure I saw them get up and walk about by themselves at home! The route was a little wiggle around the surrounding woodlands before and “out and back” loop. A great chance to see the other competitors from others waves.  The road wasn’t closed so contending with live traffic was interesting, especially as it was the first time I’d been run off the road. I reacted as expected, banging on the window of the car asking her if she thought she was Joanna Pine! On the plus side, it was a welcome distraction from the fatigue I was experiencing in my legs. My pace slowed to over 10 min/miles and the periods of walking increased, but I remained upbeat and determined to finish.

1 lap down, 2 to go. Got this in the bag…then crisis strikes and the feed station runs out of water. Dehydration set in, pace slowed and thoughts of lying under a tree on the side of the road became more appealing. I passed a friend going towards the feed station and I warned him that there was no water. Overhearing this a kind lady turned to me and offered me the last of her water. Being blessed by the kindest of this stranger I dug deep for the last 6 miles.

With just a mile to go my watch showed 5h50m. The sub 6hr carrot dangling well within reach. Giving it all I could I “sprinted” over the finish line at 5:59:35 before laying on the floor and enjoying not having to move for a minute.

Brian Fogarty of FITT won the race in a time of 4:08:31.  Rebecca Rimmington of Specialized Zwift Triathlon Academy took the ladies’ crown in a time of 4:43:46.

Adam was the only Striders’ representative, running for Sheffield Triathlon Club. 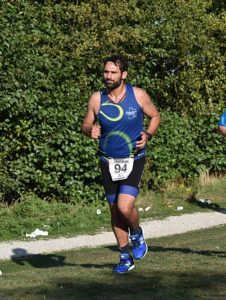