I’ve never written a race report before so let’s begin with the caveats.
Number One: the race commenced the morning after the football match the afternoon before.
Number Two: we are experiencing a heat wave so strong it makes runners long for the cold dark mornings of February.

So, now we have the excuses out of the way on with the report.  Chris Guy made his way to the Park and Ride in Manchester which meant he missed out on one of my personal highlights of the day; a trip through Glossop in Tom Halloway’s new whip. Not only was the ride smooth but he has recently discovered ‘Chilled FM’ which meant he could serenade us as we passed the caravan supermarket. Just when Charlie Maddox and I thought things couldn’t get much better we found ourselves navigating the Crack Dens of Manchester whilst listening to the ever emotive Baddiel and Skinner.

Everything was going to plan, the Etihad Stadium looked impressive (though it failed to capture the charm of the mis-matched paint of the Leppings Lane end of Hillsborough). Race organisation was good, no massive queues for the toilet, simple bag drop off…..everything was running so smoothly until the running began.
It was bloody hot and despite what I was told (and Strava confirms) it did not feel flat. Instead, we experienced 10km of torturous, dehydrating and energy sapping tarmac surrounded by bricks and no shade. I have never been so grateful to see a finishing line. To be fair, the marshals and supporters did a great job and made sure we all got round safely with no major disasters.

After the race it did feel amazing to be “coming home”.

First male home was Mohammad Aburezeq from Altrincham & District AC in a time of 31:27.  Fist female was Kirsty Longley from Liverpool Pembroke in a time of 35:28. 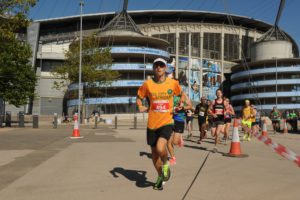