I was surprised. It’s quite normal for me to spend the last mile of a 50-miler questioning my very existence and deciding, ‘Never. Again.’ I then finish, get my medal, tee-shirt and a bowl of chilli and I’m so loved up about the race that I can’t wait to enter next.

Why did I want to enter again? Genuinely, I wanted to prove to myself that 2017 wasn’t just a fluke. I also thought I could do better. So I trained, I lost about half a stone and I made a plan.

Friday 22 June 2018 was a great day. I was really excited and incredibly nervous. I ate well, slept well, rested well in the evening. I found myself getting increasingly nervous at Milngavie. I tried to be mindful and spiritual and all that but my stomach was in knots.

My plan was to go out a bit harder at the start to make up time. My memory was that it was an easier section. I was very worried about the lochside as that had been awful for me in 2017. I’d set myself challenging splits so that I’d have more wriggle room on timings and so that I’d not be so daunted by the cut offs.

The hooter sounded and off we went. I set off and tried to make sure my breathing wasn’t too rapid and that I was running calmly. All was going really well until I hit Conic Hill. In my head it was a short climb last year. This year it really wasn’t! I worked hard then realised I was feeling very nauseous. My head then told me that I should stop at Balmaha because I clearly had a stomach bug. I felt completely ready to pull out. What on earth was wrong with me? I gave myself a good talking to and tried not to get sucked into doing the descent of Conic too quickly in order to preserve my quads. I arrived in Balmaha slower than in 2017. Not a great start.

I couldn’t face coffee. I managed some porridge and topped up my drinks. I tried to stay positive. I only spent about 15 minutes in the checkpoint then I set out to Rowardennan.

I told myself one of Steve’s mantras, ‘It comes and it goes.’ The nausea will come and go. It’s a warm day. You went out too quick. You’re strong and you’re still going. All is well. It’s beautiful here.’

I was really pleased with how I ran the section to Rowardennan; I really felt like I’d nailed it. When I got there Neill (a member of my support crew) pointed out that I’d made up time over that section. I tried to eat something – I forget what – and headed straight out. I drew on all the positives of the previous section and tried to not feel full of fear about what was up ahead.

Actually – I was pleasantly surprised. The section to Inversnaid was not as bad as I remembered. I ran every bit of it where the terrain was okay underfoot and I think that was the main difference in improving my time. You have to run those inclines that are okay underfoot because the technical bits are so gruelling and slow you down so much.

I arrived at Inversnaid and tried to eat and drink. Again, the nausea was overwhelming. I was quick with my top ups and set out trying to talk myself out of feeling sick. Again, my brain was telling me to stop. ‘You need to do another 60 miles. You’ve hardly eaten anything, so really why keep going now? Better to stop now than at 60 or 71 miles…just stop now…that’s definitely the best decision…just stop.’

I arrived at Beinglas having made up even more time along the lochside section. I was delighted. I tried to eat and managed a tiny bit of savoury food. I knew I was only 1 stage away from having a support runner, so I set out trying to be positive. I made a silly nav error and ended up at the main road, which I knew I shouldn’t have been on. I turned around and headed back – it can only have been a 10 minute diversion. Yet again – my brain started. ‘Just head back down there…it can only be a mile to Beinglas…you’re still feeling sick…you’ve got lost…it’s a great excuse to DNF…NO.’

I turned onto the right path and reflected on my running. I was running much more strongly than last year. I felt in better shape physically other than the nausea. Again, I told myself all the positives. I met a few other runners who were really struggling on this section. I tried to offer encouragement, yet was aware I also needed to just keep going. I began to fantasise about a lemon ice lolly, so I phoned ahead to my poor support crew. Alexa was just great and promised me lollies at Auchtertyre.

In and out of Auchtertyre. It was lovely to see John and to hear encouraging words from him and the team there. I tried to drink something on the way in as I knew I’d be weighed. My weight was actually fine, which was reassuring. I ate some baked potato and a lolly. The ice lolly felt like the right choice. I set off with Neill who was so bouncy and encouraging. I told myself that this was completely doable. Neill diverted off the trail several times around Tyndrum and managed to get lemon ice lollies which were working wonders. We maintained a healthy pace and the section was completed well and I was continuing to make up time. Whoop!

I decided to get some warmer clothing on for the trek over Glencoe. Neill and Sarah were going with me from there. We wrapped up warm, I felt sick, and off we went.

About 300m out of Bridge of Orchy my body had had enough and I threw up like there was no tomorrow. As I was puking I thought, ‘ Great. Back to Bridge of Orchy. I cannot go on as I’m throwing up all the calories.’ I stood up and had that post vomit euphoria of feeling completely amazing. ‘Right. Let’s make the most of this,’ I said and off we went. Sarah had an apple in her hand and it became all I wanted to eat. She gave me the apple which I nibbled and sucked and I felt much better. ‘I can do this on apples and fizzy water. No bother,’ I said to myself. Yep. ‘It comes and it goes.’

Neill phoned ahead to Alexa. ‘Nicole has been sick. All she wants is apples and fizzy water.’ Bless Alexa. She sourced them for me by the time I was at Glencoe!

As we were descending in the dark to Glencoe I felt so ill. I said to one of my support crew, ‘I don’t think I can do another marathon on fruit and fizzy water…?’ I was so ready to DNF. Their response was, ‘Well. The thing is. You can. It’s just up to you as to whether or not you want to.’

They were right. I decided I needed to try a completely different strategy at the checkpoint. I’d made up some precious time, but so what. I needed to finish. The marshalls at the checkpoint were lovely and asked me how I was. I replied, ‘I’m fine mentally. Just great.’ They told me I needed to be out by 12.15am which gave us around a 40 minute window of opportunity.

Neill and Alexa had Rennies with them. I took a Rennie and sat in the car and slept for 20 min. It felt like the right thing to do. I then managed a custard cream dipped in hot water – I couldn’t even face tea. We set out. Sarah had blueberries, nectarines, grapes and apples…what could possibly go wrong?

The 4–5 miles to The Devil’s Staircase were great. No nausea. The stop had been perfect. Then we started the ascent. My heart rate began to go up and so did the nausea. As always, the climb went on forever. As we began the descent, my body couldn’t stop itself and I threw up again. ‘Hooray – we can definitely DNF now!’ I stood up. ‘Come on. I’m going to feel great again for an hour or so. Let’s get going.’

The descent into Kinlochleven is torrid. It goes on forever. And ever.

We made it in well within the cut off.

The climb out of Kinlochleven was really hard. I knew I needed to take it really slowly so I wouldn’t throw up again. At this point I’d been joined by the sweepers who said the 3 or 4 people behind me were all timed out. I tried not to cry at realising that I was at the back. Again. I’d always known that I’d had lots of people behind me. What you don’t see when you’re racing is the number that have been timed out or DNF-ed behind you. My brain then decided that it’d be better to DNF than to be last again – who wants to be last twice in a row? I quickly saw through my brain’s plot to stop the pain and nausea and just kept going.

The last section isn’t easy. Some people call it undulating. It isn’t. It’s hilly when you’ve done 81 miles. It goes on forever and it hurts the soles of your feet as it’s so messy underfoot. Neill and Sarah were doing a great job in distracting me. I had one final puke at some point, then some ginger beer at the Wilderness 4×4. By this point, I think my brain was so exhausted from trying to get me to DNF though nausea that it decided it was pointless to feel nausea any more. I genuinely think that is what happened. I know that I’ve had that happen with pain in the past. You just keep going on it for so long that eventually you stop feeling the pain…

We arrived at Lundavra where I could feel myself being very grumpy. I gave myself an internal talking to and tried to be a nicer person. The end still felt along way off.

The fire road is just enough of an incline to really hurt your quads. I moaned a bit going down, yet knew I was going to finish. I really wanted to cry, but knew I needed to hold it together.

We made the road. We saw the 30mph sign. We saw the roundabout. I saw Alexa. I tried to run it in. I tried not to cry. I crossed the line, was greeted by Ian Beattie, Race Director who hugged me and congratulated me. Steve was there and it was all a blur. I know Alexa helped me get changed and showered yet I can hardly remember that part of the day.

Somehow we were at the awards ceremony. Steve had saved me a seat. I kept falling asleep. I remember hearing the time of the oldest finisher for this year and I stood and clapped and started to cry. Our friend James had also finished. Again, I could have wept with pride. Steve went up to get his goblet. What an achievement. He’s an absolute hero.

Then I was called up to get mine. David McLure, this year’s winner, graciously gave me my goblet saying, ‘Same time next year?’

I know it wasn’t a fluke.

I know I love the West Highland Way Race and that it has a very special place in mine and Stephen’s hearts. 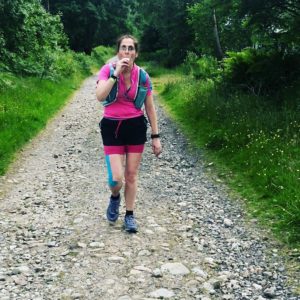