White Peak Marathon is a lovely trail run through the Peak District, all off road on the Tissington and High Peak trails. It is a one way course which leads to a bit of faff to start with.  The registration and finish is at the rugby club at Cromford Mills whilst the start is somewhere in the middle of nowhere on the Tissington trail. I’d entered the White Peak Marathon with a colleague who wanted to do it as his first marathon. We travelled over together and after registering we boarded a coach to the start.  This was the major downside for me, we sat on the bus in the car park for about half an hour then took half an hour to reach the start, meaning we got there with ten minutes to go.  It was a scorching day so warming up wasn’t too hard but it hadn’t been ideal.

The first half is up, gradually. You make your way up the Tissington trail – the very popular (and fast) autumn half marathon in reverse. Underfoot was very easy in road shoes, it’s the same surface as the Monsal Trail. I had had two hot marathon experiences already this year and this was not the one to go for a time. I decided I wanted to have a good run but that time was irrelevant. Soon after the off, after about the first kilometre, I found myself in 10th place and decided a top ten finish would be nice. The front five or six drifted off and I thought would not be seen again but kept another two or three in sight. I’d set my watch to just show distance so I wasn’t distracted by speed or numbers and just ran on feel. This pace felt very manageable. I really enjoyed myself for the first ten miles, taking in the views and trying to keep a pace steady but solid. The clouds had all lifted after ten or fifteen minutes and the heat was rising off the trail. I tried to run in shade were possible but this was limited.

Once at the 10/11 mile mark you switch onto the High Peak trail and head towards Matlock/Cromford. The trail stays fairly flat with undulations for about 6 or 7 miles here. Along this stretch I reeled a few runners in, moving up to 6th at one point with two other runners nearby.  The second downside of the day was the water stops. They were not highlighted in the briefing or on the route map so it was unpredictable as to when you would come across them. I had decided not to take a vest with bottles with me, in hindsight probably I should have done. However, even at 7 that morning the forecast had not been for such a hot day.

I had started to slow by about 15 miles (but not as much as others I had passed!) but at the 19 or 20 mile point I started to get some cramps. On the downs, where I had banked on cruising and keeping a rhythm my hamstrings both decided they were unhappy. I had to stop and stretch a few times. By this point I’d dropped to 9th again, gaining one back with a mile to go passing a runner lying on his back having his cramping hamstrings stretched by a spectator!  The flat last mile along the side of the canal seemed to go on forever before a final hobble onto the grass to cross the finish line. I enjoyed the race, the first half in particular was a lovely run with the second half being tougher even though it was the downhill half. Once at the end there was more than enough water to rehydrate, bananas, biscuits and a prized finishers mug! 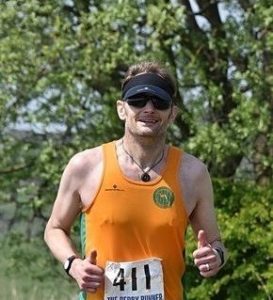