So there I was, looking for a February half to fit around a busy schedule of family commitments this month when I came across the Great North West (Blackpool) half. This race sounded appealing from the outset, not just because of childhood memories of the place but because it was billed as a scenic, flat course which produced many PB’s.

When the organisers made that statement I don’t think that they envisaged it being run during the tail end of storm Dennis and it was to my surprise that the event wasn’t cancelled to be honest. I kept checking the website throughout the previous day and eventually they made a statement which said ‘we have been inundated with emails asking if the race is going ahead. This race will NOT be cancelled unless wind gusts exceed 60mph, the sea decides to destroy the coastline or a meteorite lands on Blackpool! Well with the coastline intact and no sign of a meteorite then I can only suggest that the wind only got up to 59mph as this was about the windiest race I have ever run.

I got to Blackpool a few hours before the start which is customary for me and parked near the tower for £10 although that was for most of the day and anyone just wanting to park for the race itself can do so for around £4.

The race start is just north of the hotel Metropole for those that know the area and the course itself is a figure of eight with the start and finish at the centre of the two loops. There are two laps of the course; two laps of the small loop first (3 miles) and then two laps of the larger loop after that before finishing in the centre.

It has to be said that the organisers did an excellent job getting this race on which was directly on the sea front and so windy it was difficult to hold a conversation at times or indeed keep balance with strong gusts.

Once the race started the first two laps of the small loop went quite well as it was at sea level and well screened by a cliff and the hotel so we were protected from the elements. The second section however was something quite different. This section was on two levels and although outward bound the route was nicely tucked under the cliff so there was little wind, you then had a small hill to double back which then exposed you at the top of the cliff for around 2.5 miles which had to be run twice in head on winds which were so strong even some of the stronger runners were at walking pace. Needless to say I didn’t get anywhere near my PB.

All in all it was an enjoyable experience and I would do it again if in good conditions as it is a course that could produce a PB. It is however repetitive and only covers a small distance of coastline. Is it scenic? If you like looking at the sea of the bottom of a cliff then yes.

1110 runners took part in this year’s Great North West Half Marathon in Blackpool. The race was won by Tristan Windley of Keswick AC in 1:15:15, and the first woman to cross the line was Rachel Brown of Border Harriers & AC, in 25th place and a time of 1:27:04. Well done to Chris for representing the Striders on the windy north west coast, and thanks for your report.

Full results can be found on the Fylde Coast Runners website 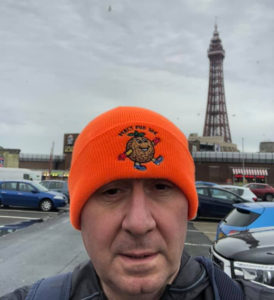