Another Christmas at the in-laws in Suffolk and another race to keep me motivated after the post Christmas slump. Last year’s energetics took place at the Wymondham 10k on New Years Day. This year was the turn of the Groggy Doggy Cross Country race, hosted by Bungay Black Dog running club on boxing day. I knew of the club prior to the in-laws moving down here, as they host the annual festival of running that takes place every April.

Runners have the option of one or two laps of Outney Common. Each lap is approximately 2.6 miles with most of it taking place on very muddy grass with one footpath for the finish line. Today’s race was a bit different in the fact that, as the name may suggest, you can run with your dog. Fancy dress was also optional. I opted for two laps without a dog and kept it festive with my elf hat!

As someone who races mostly on road this made a great change. The terrain was extremely muddy and there was also the option to run over a bridge or as in my case, run through the river! On the second lap this did help as it gave me an advantage on catching up to a runner who had decided to go over the bridge who I ended up getting past in the last mile.

I appear to be the only Strider taking part today, finishing in 43:36 and placing 39th out of field of 165. 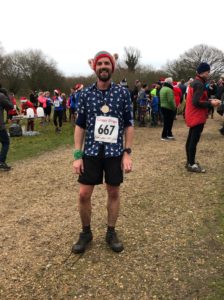