I signed up to the RunThrough Alton Towers 10k thanks to some incredibly persistent Facebook advertising and a desire to find a race that fitted in as something “fun” amidst a very busy autumn race calendar. There was a choice of 5k, 10k or Half Marathon, with all three races taking place during the same weekend – I plumped for the middle distance, deciding that it was too far to travel for effectively a Parkrun but that a half still doesn’t quite factor in to my idea of what qualifies as fun.

We set off before the day dawned but it turned out to be absolutely perfect conditions – cool, not too breezy and not a hint of rain. The park was otherwise closed to the public, so getting in was an absolute breeze – we’d been told to allow between 2 to 3 hours to navigate the monorail that takes you to the entrance, but arriving nicely in the middle of this timeframe resulted in us getting parked literally next to the gates. Very handy, but did mean we had far too much time to kill before the race began which we spent meandering around a practically silent theme park. Creepy!

The start of the race itself was what you might describe as haphazard. With the 5k and 10k races both taking place on the same day (the 5k set off 18 minutes behind the longer run), it wasn’t made particularly clear where runners were supposed to go, and everyone was piled on to a very muddy, slippy field to participate in an enforced warm up before being directed to the start area. Unfortunately the directions could only be heard by those stood in one area of the field, meaning that the staggered start based on predicted finish times didn’t really work, so the first kilometre of the race was spent trying to weave into a suitable position and find myself a bit of space.

The first bit of the route was great fun, overtaking difficulties aside, as we looped through the theme park itself. Round past the famous towers to start, a whizzy little down-and-back-up past Oblivion and The Smiler, and through CBeebies Land where we were cheered on by the unlikely partnership of Peter Rabbit and Tinky Winky. Onto “Mutiny Bay” to be oooh-arrred at by a few pirates, zipping past the Haunted House, and then under part of Nemesis where we were sent out of the park via a service road up a stinker of a little hill.

Kilometres 3 to 8 were entirely weaving around every single car park Alton Towers has to offer – and there I’d been feeling smug that we hadn’t had to traverse them upon arrival. Thankfully there were plenty of marshals providing encouragement (each of whom were doing their best Bez impression, having all being given a tambourine), as well as various characters from the park dotted around doing a selection of entertaining things, which just about managed to prevent this from being an absolute drag. Surprisingly uppy and downy as well.

Finally we were directed back inside the park, where we joined up with the 5k runners for the last couple of kilometres – again this made finding space to race quite tricky but did mean the route became much more fun again! Effectively we retraced our steps past rides including 13, Rita and Hex, before ending in front of the towers themselves.

It was the first time this race had taken place, and the organisers have been very open to feedback so hopefully the teething issues particularly around the start will be ironed out for next year. I would recommend it overall, there were loads of goodies at the end, a great quality medal, a free t-shirt (unbranded, unless you paid an extra £6 to add the Alton Towers logo on) and we had an absolutely bloody fantastic day once the race was over. Nemesis won the ride of the day, closely followed by the Wicker Man, in case anybody’s wondering!

In the 10k, “taking it easy” Jim Rangeley was first Strider home in a time of 51.50, with myself nabbing a Power of 10 approved PB of 55.25. We did see another very friendly man revisiting his old workplace (!) who self-identified as a Strider but isn’t listed as such in the results and unfortunately I didn’t catch his name! The race was won by Benjamin Goodfellow of Kendal Mint Co in a time of 33.17. Lucy Charles-Barclay (unaffiliated) was first female (35.47).

2048 runners lined up for the Alton Towers 10k. Half Marathon results follow the 10k results, below.

Full results for the Run Alton Towers 10k are available on the RunThrough website.

1091 runners lined up for the Alton Towers Half Marathon. Michael Roderick of Tri Hard Harriers won the mens’ race, in a time of 1:12:38. The womens’ race was won by Natalie Lawrence (unaffiliated), in 1:24:46. Strider Jordan Moat finished 13th overall and 6th in his category.

Full results for the Run Alton Towers Half Marathon are available on the RunThrough website. 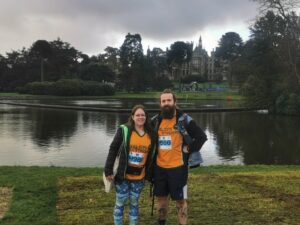