So, this race came onto my radar about 10 weeks ago whilst scrolling through Facebook one night.

I am doing Xterra Snowdonia Ultra Marathon in July (my first one, there are a few firsts in this report, see if you can count how many) and as I have only done a few Sheffield halves I thought it would be a nice little training marathon (this was my first Marathon too).

The fractured Marathon is a 10X 2.62 mile loop course on hard pack paths, some grass grazing fields with cows and sheep, and forest footpaths with a max elevation gain of 364 feet. It can be run as a solo or as a relay team, male/ female and mixed team, and minimum of 2 and max of 5 runners, taking turns to run a loop.

Training had gone well, as well as it can be training for a trail marathon, that finishes in the dark, when you have an obstacle race the next week (Total Warrior in Leeds  26.6.22, not a first) then an Ultra two weeks after that. I thought that driving down to Derby on a Friday afternoon to run in some lovely forest and woods was going to be the perfect start to my longer distance running experience. One thing I didn’t expect was the heat of a Friday in mid-June. Summer had decided to pay a visit just to add another challenge! Oh and my Garmin watch deciding to declare a state of emergency and contact anyone nearby that could rescue me, but that will come later.

Arriving well fuelled with porridge and wraps I headed off to the organisers tent to register, ‘So you’re a Strider’ commented one of the volunteer’s and it turns out that this lady is moving to Sheffield and has just joined with Hillsborough! (sorry I’m terrible with names but she was lovely and very helpful).

As it says in the name, the marathon is ‘Fractured’ because each 2.62 mile loop has to be completed within half an hour, once you do your loop you are held back from the start until the half hour comes up then you set off again. The event begins at 7pm and the last loop is run at 11.30pm, 12pm sharp cut off. So head torches are mandatory (another first). If you don’t make the half hour, you have to wait till the next one comes round before you go again. There is an aid station at the start finish for solo runners, providing water, fizzy drinks, sweets, fruit, biscuits, crisps and chocolate! Thank goodness water was in abundance as it was a very warm evening.

The excitement built as we got nearer to race start time, teams came with gazebos, BBQ’s, camper vans, there were fairy lights and lots of music, it really felt like a party, it was a brilliant atmosphere.

I didn’t know anyone but you know what it’s like at events, stand on your own long enough and someone will say ‘Hi’. Luckily for me someone did. Rebecca had done Fractured a few times before, she ran for the local club ‘Ivanhoe Runners’ but that night for ‘Tamworth AC’. As it turned out, she ended up being the fastest female on the night, fifth overall, so I was getting some great pro tips at the end of each lap (it was the only time I saw her as she was just a blur for most of each lap).

We had a quick briefing then we were ready, counting down from ten and the announcer calling to the teams ‘check your baton’, this became the joke line for each new lap (the batons had the timing chips for the team, solos had ankle chips), with more and more people joining in the reminding call for the batons as the laps grew.

A lap. You set off down a gentle slope then up a steady rise (this is all visualised in my head now, as you can imagine doing it 10X in a row). Continue up with a few gentle sweeps left and right to the highest point then a nice fast meandering gravel track to get some free speed and then into the woods. Dog leg in and out through the forest until you come to ‘the hill’ It wasn’t steep, nothing like Sheffield hills (and I love running hills ask Graves Wednesday group) but this became for me ‘Blue Hill’, blue because of the language that came from me and everyone else as we got to it, there were other hills, probably steeper, but this one just seemed to go on and on. I also queried to one of the really brilliant marshals on my 7th lap if the hill was actually getting longer! He just smiled! Well he wasn’t running it I suppose!

Then it’s a nice downhill hard pack session, some flat, 10 soil, gravel steps and a little uphill to the finish line to loads of clapping, cow bells and cheering. Done! One lap of 2.62 miles, now to do 9 more! They were all much the same, just gradually getting darker. At 10pm we had to put on the headtorches, which made it even better for me, I loved how it changed the feel of the route and challenge.

Oh and the story about my Garmin watch. It is the last lap, we are on the start line waiting to go. With ten seconds counting down it decided that I was in some kind of grave danger and therefore needed to contact the emergency services (another first)!

Try to picture this, it’s pitch black,  I have a head torch on, we’re at ‘THREE…….TWO…….ONE……..GO!’ and I’m trying how to stop my watch calling the whole of Derbyshire emergency services to a stately home because it’s doing its best to save me!

I managed to stop it from doing the 999 call out, however it wiped my time so only recorded 9 laps (thank god I always had my phone in my bag with Strava going). It did however contact my partner at home, who was sleeping, at 11.30pm telling her that I was in grave danger!

I knew she was calling me, my watch was telling me but I couldn’t answer, I was on the last lap! I was putting in my all! That just made me put a bit more in! 11 calls later and the last 2.62miles done and my first ever marathon was over and I was back at the start, safe (I was always safe by the way Garmin!).

My overall opinion of the race was that it was well organised, well populated for a small event, it was really cheep and had a brilliant atmosphere. I would love to do it again but maybe somewhere nearer to home just for convenience, (I got home at 1.30am on Saturday morning and couldn’t sleep as I was still buzzing from it!).

Full results can be viewed here. 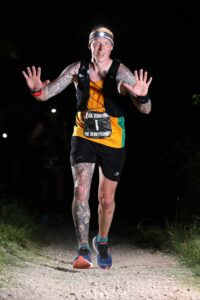