Yes it’s your 20 mile correspondent here again. It really is that time of year, isn’t it? This time the race in question was the now infamous Spen 20, which was trending on Twitter earlier this week after a runner was asked to drop out of the race for running too slow (Club statement here)

Fortunately our very own race addict David Perkins, who ran the race, can fill us in. He told me that ‘as I was in the race, I got to thinking it was a great club, friendly, well organised and supportive. The race was on and across pretty busy roads and it occurred to me it must be a nightmare to stage. It always felt safe though with marshals where it mattered. In a way I cannot blame them for wanting to pull the woman out of the race. Without marshals it may have been dodgy. The mistake they made was not advertising a cut off’

As for his own race, Dave told me that he ‘decided to enter on the day having never run 20 miles before and still a bit shagged from Retford the week before’

So how was the race, I asked: ‘It starts with a lap of athletic track. Then on to the roads. Some nice country roads, a few testing hills. It’s a two lap course. I took it easy to begin with, but it still felt tough a few miles in. I was worried I had bitten off more than I could chew! As I had tried very hard the week before at Retford (a race I had blown up on the year before) I thought I was gonna really struggle on the second lap. But I started to feel good at 10 miles and quite strong at 12 and started to pass quite a few people. I was disconcerted by how good I was feeling! But I got to 17 and the wheels started to come off. Thank God I only had a little more to do. Everyone I had passed earlier started to come flooding past me. I remember thinking that morning, if I can do 20 I can do a marathon, but at the end of 20 I was thinking there is no way I could do another six! It would just take too long. I now realise how hard you have to train for a marathon to do it and oneself justice. And I simply haven’t got that kind of dedication.’

Well I think he’s being mighty hard on himself there, 20 miles on the back of a slim amount of training is no mean feat. Well done Dave!

First male was John Hobbs for Valley Striders in 1:59:30, while first female was Shona Fletcher for Richmond and Zetland in 02:06:26.

For the complete results please see the UK Results website. 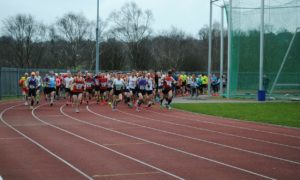