Two weeks after i’d stood up in the Compass Room at the the Lowry in Salford as Best Man for my brother Chris’ wedding to the lovely Maria i found myself standing looking at it as I waited (and waited) for the start of the City of Salford 10k, a race which takes in much of MediaCity and out into the surrounding area between it and Old Trafford.

It has all the hallmarks of a Sports International Event in the Manchester Area, Dr Ron Hill was there (although I didnt get a photo with him like last year), the race started 15 minutes late. there weren’t any waves of runners so its a bit of a scrum at the start and again it was won by a runner that anyone who was at Percy Pud last year will be familiar with.

Its a great atmosphere at the start, and at the end, as it starts in the plaza outside the BBC Building and ends there with a fast last 250m as you come back round from the footbridge over the River Irwell. The rest of the course isn’t as inspiring (unless running round an overflow carpark at Old Trafford or past the set of Coronation Street gets you going) but its fast and flat (40m elevation) so there were a lot of runners going all out PB hunting.

2667 people finished the race with Mohammad Aburezeq of Altrincham & District first home (again) in 30.29 and Jacqueline Fairchild of Trafford AC winning the ladies race by over a minute in 35.02

One Strider (me) travelled across the Pennines and braved the Greater Manchester weather. 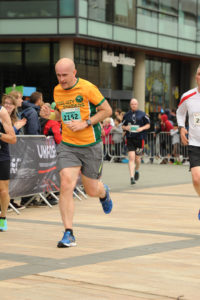 Me, surprising myself on a 46.32 with minimal training in the last 6 weeks