This is what the organisers had to say “The 30. Just a few short short miles up from a marathon, the perfect step to ultra distance”.  Sounds a doddle but Nick Booker said that “brutal” would sum it up nicely. With sections compared to a nightmare version of Jenkin Road there’s hardly a flat bit with the downhill sections ending up just as tough as going uphill. Add in lots of copious mud and you’ve got a real challenge. Funnily enough John Rawlinson said something similar when he ran the event a couple of years ago White Rose Ultra 2015. There’s a theme here isn’t there?. 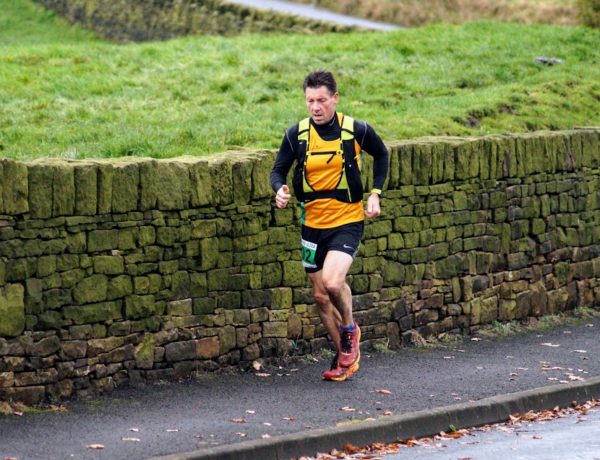 Nick running uphill. You can tell from the knee lift that a bit of angle is involved .

Both John and Nick paid tribute to those competing in the 60 mile and 100 mile versions. The organisers had to pull someone from the 100 mile event as it had taken 20 hours to complete 60 miles – I hope that the t-shirt was still handed over.

The ultra has been described as the new marathon but it’s  a niche event with small fields and a fundamentally different proposition where survival is the key rather than just hammering out the tempo. Entry fees are high, £50 to £60 but then, the level of support required is far greater than your average race and you’re not going to be running one every week anyway.

Full results here including the 60 mile and 100 mile events so that you can marvel at their achievements.  White Rose Ultra 2017 Results .