32 miles with 4396ft of ascent, this is not one for the faint-hearted. Refreshments along the way included hot dogs and whiskey which might have helped a little?

‘The Hobble’ always has a fast and competitive attendance but this year’s depth of field was exceptional. In addition to its familiar status as the first Runfurther race of the year and the first (arguably the largest) annual gathering of quality trail and fell ultra-runners, it was also a qualifying race for an international ultra-running championship. For the first time ever, entries had to be closed in advance at 500.

The quality of the field was evidenced by the fact that no fewer than six men broke the previous record. Fastest of them all was Thomas Payn (no club listed) in 03.54.16 and first lady home was Julie Briscoe of Wakefield in 04.31.54. Taking his rightful place amongst the quality field of ultra-runners was sole strider, Simon Bayliss. 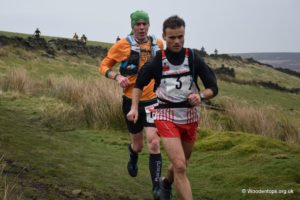