On his first edition the half marathon happened at the same time as the 10km Corriroma at its 11th edition, in the magical eternal city night atmosphere. 4510 completed the half marathon and 2019 the 10km in a fairly hot summer-ish evening.

I tried to race to shape off my pb of a couple of minutes and finally hit the sub 90’ but was unsuccessful and dropped back at the 10k mark (passed at 42’) with a massive headache and shivers all over my body. Despite the feeling was that I would complete the course walking in over 2 hours, I managed to pull myself together and cross the finish line in 1h37’ (12th lady).

The first 10k of the half marathon route were absolutely stunning, passing by all the major landmarks in Rome, some up and downs but quite manageable. The second half could have been nice if there hadn’t been long stretches with no light whatsoever. This was one of the 3 main feedback that the organiser has received, together with the inappropriate and badly handled start location (there were only 3 starting blocks – elite, 1h15’ to 1h45’ and everyone else – and it was a funnel start, from Piazza del Popolo into Via del Corso, causing people to walk or considerably slow down for the first km or so) and the lack of some of the km markers (as well as placing the marker 21km at least 1000m before the finish line).

Nevertheless I would definitely go back and run it again (to check on improvements lol). 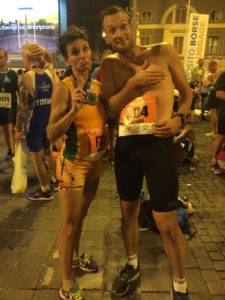 Disappointed me and a friend from Venice at the finish