The 30th April saw the inaugural running of the Oswestry Half marathon, based at the British Ironwork Centre in Shropshire, home of Uri Geller’s ‘Spoon Gorilla’. Two striders , Father and Son duo Stuart and Ben Jones, joined 873 others in breezy but fine running conditions. In comparison to Yorkshire half marathons, the course was flattish and fast and conventional mile markers were replaced by giraffe and gorilla sculptures! David Webb of Telford AC stormed away to win the race in a time of 1:10:10. Happily, the race for second was won by Ben, cracking the 80 minute barrier for the first time (1:19:22). There was more success for the Jones’ as Stuart took minutes off his PB (1:36:20) and finished 2nd place over 55. Both were presented with medals that would have made BA Baracus jealous.The first woman home was Belle Ward (unattached) in 1.27.58. 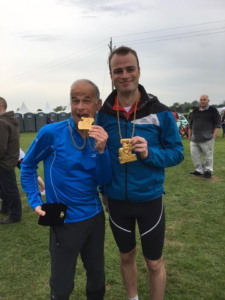