More Striders on tour. This time Andy Rowland making a rare competitive appearance. In his own words,

I made an appearance in Douglas, I.O.M today in a striders running vest, my first race for quite a while now. It was Prom 5km in 23.51 and it don’t get any flatter other than racing on a athletics track

The Prom Run series is:
a new series of 5K run/walks on the Isle of Man that will utilise our beautiful promenades and sea fronts around the island. We want to encourage all ages and abilities to take part, get fit and get active in a friendly, fun, non-competitive environment.
There were 77 finishers in the 5k race, which was won by Jack Okell of Manx Harriers in a blistering 15.50. The first woman home was Olivia Newstead, unattached, in 20.23.
Striders Result: 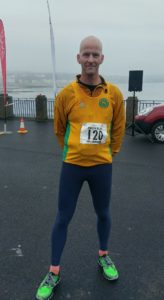