I was looking forward to this event as it was my first Duathlon, until I checked last year’s results and started to panic! I  was surprised how fast everyone was, it was the bike that concerned me I have a mountain bike, which is obviously a lot slower then a road bike. I briefly considered getting a road bike, but instead opted for the cheaper option of putting intermediate tyres on my bike, this would take a few minutes off. After a few calculations decided I would aim for a total time of 2h 30.

The day came and you couldn’t have asked for better weather sunny and not too windy. Registration was easy as was setting up in transition. There were a lot of expensive fancy bikes, fancy Tri suits and multiple shoes around, whilst I was in my striders vest and was wearing my trial shoes for the whole thing. It was nice to see Dawn Jackson at the start a nice friendly face.
The race consists of a 4.5k fell run, a 29k bike ride and a 6.5k road run, you get to choose which run to do first.
I opted for the fell first which seemed to be the more popular choice. The fell consists of the first and last mile of the Salt Cellar race both  pretty steep but the views at the top are worth it providing you take a moment to turn around and take the view in, the whole point of fell running right?
Next was the bike ride, out and back twice, sure enough I was over taken by quite a lot of speedy road bikes, but I enjoyed the ride and found it a lot of fun and kept a decent pace.
Then came the road run, this was tough the wind had picked up and it wasn’t flat as described more undulating.
I finished in 2.14.25 so was really happy with that. I would definitely recommend this event and hopefully will be back next year.
94 duathletes finished the race. Jason Chubb and Richard Martin were declared joint winners in a combined time of 1:38:00. First lady was Elspeth Grant in 1:44:07.
Striders’ results below; 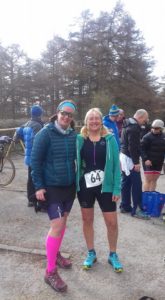 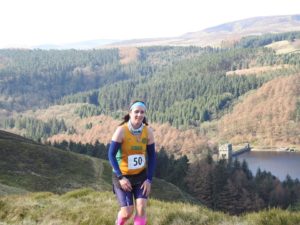 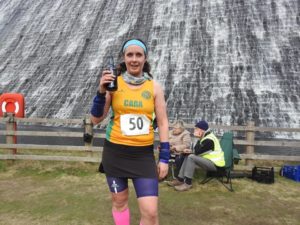