This year the skyline remained anticlockwise as for 2018 rather than the previously usual clockwise. The only route change was that Mam Tor summit would now be contoured around rather than crossed (for erosion reasons) so a smidge less ascent overall. As in 2018 the conditions were bright and relatively benign, just a chill wind on the tops to contend with. Visibility was perfect so no route finding issues and if you remembered to look around now and again there were some beautiful views to be enjoyed.

A decent turnout of striders this year, and many of us gathered briefly before the off. It’s a hard start, straight up the zigzags to reach Ringing Roger and the plateau. I made a conscious effort to take it easy on this ascent, resisting the temptation to waste energy trying to overtake people in the crocodile. I ended up running with Alison on the way up and then caught up with Amy on the way round to Grindslow knoll and the first dib. The route carries on around the edge of the kinder plateau and then on to the flagstones over Brown knoll. These provide a relatively fast section – it must have been a lot harder before the flags were laid. Onwards up the ridge of Rushup edge to reach the road at Mam Nick road crossing (the first cut off and some water available – but the water table fell over on me so I didn’t actually get any!)

We contoured around the summit of Mam Tor with fine views and the realisation that we were half way round – and then followed the great ridge all the way to the top of Lose Hill. A fastish descent though my legs were refusing to turnover as quickly as usual and a few people passed me here which irritated me slightly as I’m usually fairly speedy going downhill!

What goes down must go back up! The biggest slog of the race is the steep direct ascent of Hope Brink – its a fast walk rather than a run (at least for the non-elite), and I took the opportunity to eat most of my jelly babies here having opted to eschew gels.

Emerging onto the roman road you are on the only out and back section of the route as you turn R to summit Win Hill then come back down the same track; this gave an opportunity to see where some of my fellow striders were. As I headed towards Win Hill summit, Ben was heading back down so a good few minutes ahead. Then after I had dibbed at Win Hill and headed back down I exchanged high fives with first Amy and then Alison so I knew they were not far behind. It was around this time that it started to dawn on me that I was significantly up on last year’s time. Up to the top of Win Hill I had averaged just over 11 min miles, if I kept this up I was going to be 20-30 minutes quicker! This gave me some encouragement to try to keep on running as much as possible on the gradual descent to beyond Hope Cross. The last couple of miles are a struggle, gradually ascending to regain the kinder plateau and then following it back round to Ringing Roger which never seems to arrive. When I did see Ringing Roger I briefly wondered if I could finish in sub four hours – but the section of scrambling necessary to get off Ringing Roger put paid to that notion (and again my descending speed was not there). When I reached the field, someone came sprinting past me absolutely flat out and I could do nothing about it (other than be impressed that he could still sprint after 21 miles!). Mark and Ben were still in the finish field, Ben having finished a couple of minutes ahead of me, and less than five minutes later we saw Amy descending to the finish.

I enjoyed it more than last year having found a better rhythm and paced it better. I hadn’t targeted this race nor tapered for it, so was pleasantly surprised to be a half hour quicker than last year. Next year I may train for it properly and see what I can do (but then I might not get nice weather for a third year in a row)! Doubt I’ll ever get near the times posted by Dan and Paul though!

We were rewarded for our efforts with a pie and pea meal in the village hall – couldn’t have chosen anything better! 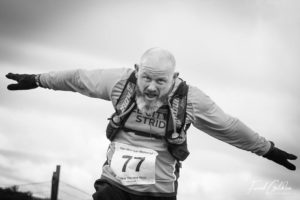 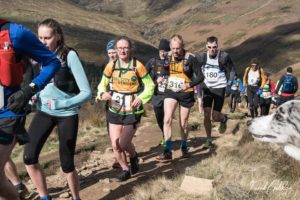 Collie photo bomb! Alison and I on the first ascent. Both photos: Frank Golden Photography